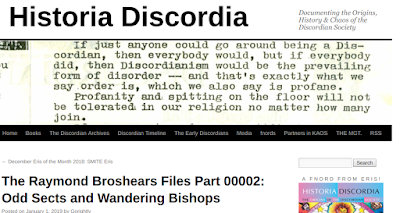 In "The Raymond Broshears Files Part 00002: Odd Sects and Wandering Bishops," Adam Gorightly explores some of the con men who were somehow fingered as "CIA assassins" and the like by DA Jim Garrison.

Here is Adam, writing about one of the criminal masterminds Garrison targeted, a guy named Thomas Edward Beckham:

Beckham followed his mentor’s lead by getting into a number of scrapes himself. In February of 1961—during Army basic training at Fort Leonard Wood in the Missouri Ozarks—Beckham went AWOL, and in short order found himself in the stockade. As is typical in such cases, the Army figured it best just to let him go. Beckham resurfaced later that year in New Orleans where he was arrested for vagrancy.

In 1962, Beckham was running a scam called the “United Cuban Relief Missionary Force” that was subsequently dismantled by the FBI. As part of this con, Beckham sported a clerical collar, pretending to be a Catholic priest, while soliciting donations that he apparently pocketed. That same year he was charged with the rape of a minor, and a second vagrancy charge. Some priest.

Adam thinks that a literary hoax -- a purported translation of the Necronomicon, apparently by a guy named Peter Levenda -- was influenced by Illuminatus!