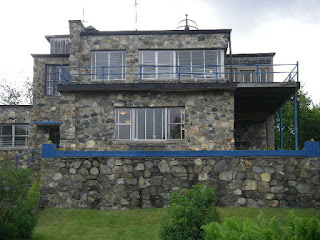 The Wilhelm Reich Museum. Did RAW ever make it to Maine and visit it?

If you think that Robert Anton Wilson may have exaggerated how badly Wilhelm Reich was persecuted by the U.S. government, I invite you to read this New York Times obituary for Mary Boyd Higgins, who served as the devoted trustee of Reich's estate, preserving his writings and establishing the Reich Museum (which I wondered if RAW had ever visited.)

"An Austrian-born Marxist who had linked fascism with sexual repression, Dr. Reich had the rare distinction of having his writings ordered destroyed by both the Nazis in Germany in the 1930s and the United States government in the 1950s, during the McCarthy era," the obituary observes. Reich died in a federal prison.

"When she was appointed trustee, in March 1959, Ms. Higgins had her work cut out for her.

"She quickly discovered that most of Dr. Reich’s personal papers, which he had wanted sealed for 50 years before anyone could see them, had been stolen; she had to start litigation to retrieve them. He wanted his Maine property turned into a museum; she would need to become an expert in museum design. She also studied copyright law in seeking to have his books republished.

"Another hurdle was paying for it all. The trust had just $823 (less than $6,000 in today’s dollars) for her to carry out his wishes. She would receive no salary."

It's interesting to compare Boyd's work with the efforts of the RAW Trust. Rasa and Christina have taken on quite a task.

I have a New York Times digital subscription (a real bargain if you watch for sales) and the obituary section is one of the best features, a fascinating look at American history. The Boyd obit is by Katharine Q. Seelye. I'd love to have her job.

Thanks to Jesse Walker for calling the obituary to my attention.