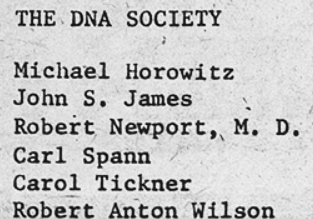 "A letter from the DNA Society" protests that "Leary has been incommunicado for seven months." The DNA Society is described as a nonprofit interested in Leary's ideas. The people who signed the letter are Michael Horowitz, John S. James, Robert Newport, M.D., Carl Spann, Carol Tickner and Robert Anton Wilson. (Mr. Newport rescued and preserved the Discordian Archives; Michael Horowitz was Leary's archivist. The other names don't ring an immediate bell.)

"Why is Dr. Timothy Leary in Prison?" is a letter written by RAW.