Michael Johnson on liberation from the Black Iron Prison 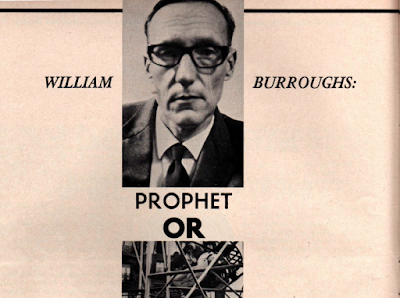 This is a "promoted from the comments" blog post (to steal a phrase from Tyler Cowen); I liked Michael Johnson's comment from Sunday's post and wanted to make sure everyone will see it. But first, if you haven't already, please read RAW's interview with William Burroughs, so you can see the statements which (I think) provoked Michael's comments, which I don't think are "off topic" at all.

Off-topic, but last week I was reading in Joseph Campbell's _The Inner Reaches of Outer Space_ and happened on this bit:

"Thus a mythology is a control system, on the one hand framing its community to accord with an intuited order of nature and, on the other hand, by means of its symbolic pedagogic rites, conducting individuals through the ineluctable psychophysiological stages of transformation of a human lifetime - birth, childhood and adolescence, age, old age, and the release of death - in unbroken accord simultaneously with the requirements of this world and the rapture of participation in a manner of being beyond time."
-p.xxiii

We can read this as a "glass half full" variation of what WSB and RAW saw as word-made metaphorical human constructs that imprison our full potentials, but a fuller reading of Campbell suggests he's sympathetic to the gnostic views of RAW and WSB and words/metaphors and systems of social control so prevalent most people never even "see" them.

Also NB: Campbell's use of the term "framing" and Lakoff's work.

Finally: was WSB's master trope - that words are a virus from outer space that have found a perfect host in the nervous systems of humans - a precursor to Dawkins's "meme" thing? WSB studied directly under Korzybski and I can't help but think this "infection" idea from words was influenced by Korzybski. The theory of the cut-up/fold-in method was a further method of self-defense. RAW used cut-ups and all of Korzybski's extensional devices plus AK's student David Bourland's logical extrapolations from AK: E-Prime.

All of this in the name of Liberation from the historical social construction of the Black Iron Prison.