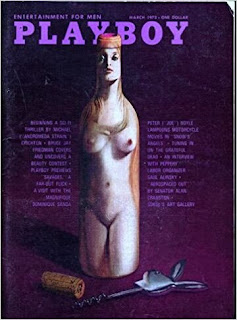 Playboy, March 1972, where the letter below appeared

A note from Jesse Walker, who discovered Robert Anton Wilson's use of "Ronald Weston" as a pseudonym, or at least helped confirm it: "The *Jaguar* exchange gave me a little brainstorm, and I did a search at the Internet Archive for 'Ronald Weston.' I found that 'Weston' periodically wrote letters to the Playboy Forum."

THE ONLY MAILBOX IN TOWN
When I read that the U.S. Postal Service and the Bureau of Customs are inspecting first class mail from overseas without warrants or prior consent of the addressee (Forum Newsfront, October 1971) I heard a loud whirring sound. I finally recognized it as Thomas Jefferson spinning in his grave. I also heard the ghoulish laughter of Lysander Spooner, anarchist and constitutional lawyer, who predicted in 1848 that a government mail monopoly would eventually lead to this type of thing.
Ronald Weston
Cuernavaca Mexico