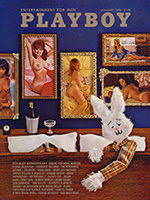 Martin Wagner, still hard at work in Austria, has put up a new page which has the text for many letters to the Playboy magazine forum that were apparently written by Robert Anton Wilson, under various pseudonyms. Martin notes that in Cosmic Trigger 3, RAW wrote, "Mostly, in the Playboy Forum, we followed the ACLU’s positions, but often we pushed a bit further and sneaked in some anarcho-pacifist propaganda – never in Playboy’s voice, of course, but as the voice of a reader."

The "Playboy" cover, above, is from the issue that features a letter to the editor from "Simon Moon" of Chicago, Ill., explaining the difference between (1) Legitimate laws that protect people, (2) Laws from the "one half of one percent" meant to rig the system and (3) Laws punishing victimless crimes. The image is for the magazine in which Mr. Moon's letter appeared.