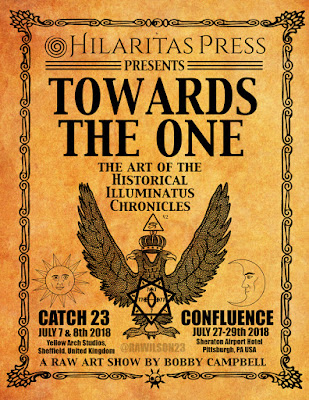 Artist, writer and comic book publisher Bobby Campbell has announced a new art show for 2018, available exclusively in only two events, one in the U.S. and one in the United Kingdom.

Bobby has done new illustrations for the new editions of Robert Anton Wilson's three "Historical Iluminatus" books, The Earth Will Shake, The Widow's Son and Nature's God. That art will be displayed in an art show, "Towards the One," to be exhibited July 7-8 at Catch 23, and July 27-29 at the Confluence science fiction convention in Pittsburgh. The books should be out soon from Hilaritas Press, the publishing imprint of the Robert Anton Wilson Trust.

The second wave of talent for Catch 23 has just been announced; it includes Greg Wilson and Daisy Eris Campbell. Meanwhile, other RAW programming is planned at Confluence; see the latest update.

I would love to see Bobby’s art show.