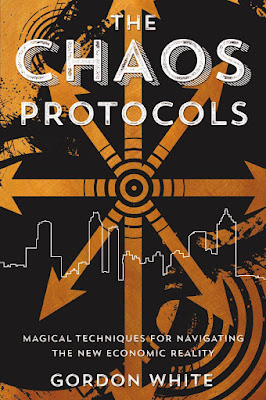 One of the things I loved about Illuminatus! was the sense that all of the characters were trying to figure out what the hell is going on.

I generally feel I don't quite know what's going on, either. I try to stay open to ideas and new information. There's a limit to my open-mindedness to be sure — I'm not likely to sit down and read a book by a Marxist-Leninist, or someone on the alt-right — but I also try to listen to a variety of voices.

Tyler Cowen has a new book out, The Complacent Class. Cowen, one of the few writers who can persuade me to read any book of his that has just been released, apparently argues that complacency, in the sense of an unwillingness to take risks, is one of the biggest problems in the U.S. right now. I have it on my Kindle, and as soon as I finish the next couple of books I feel I must read, I'll read Cowen's book.

I am deep in my second reading of The Chaos Protocols, the 2016 book written by Rune Soup’s Gordon White. It is, quite frankly, the best contemporary book I have found so far to give practical advice and perceptive forecasting on the strange newish world we are quickly finding ourselves immersed in—the world I have given a brief overview in my post “The Road to 2020.”

I've bought it and put it on my Kindle, so we'll see!

Gordon White is interested in RAW; I wrote last year about a podcast he did with Cat Vincent.

Tyler Cowen's blog recently pointed me to a blog post by Ryan Avent, which argues that the main effect of automation is not to leave people unemployed, but to leave them worse off.  “Given the structure of our social safety net, automation tends to increase poverty and inequality rather than unemployment.”  This sounds like an argument for a UBI.

I did not know who Ryan Avent is, but reading his piece convinced me I should get to know him. It turns out he has a book out, The Wealth of Humans: Work, Power, and Status in the Twenty-first Century. I didn't buy it, but I have it on hold at the library.

Robert Anton Wilson, by the way, was very interested in the effects of automation, and I suspect he would be interested in Avent's work.
on March 28, 2017

My own guess is that Gordon White is not "getting rich" from his book but is attempting to share what he knows and express himself.

If he did get rich from the book, though, I wouldn't object at all.