Patriots still guard America against Communism, just like in Illuminatus! 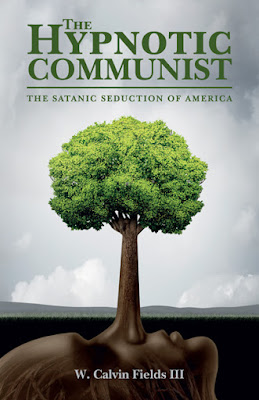 If you've read Illuminatus!, you may remember these passages from the first book of the trilogy, in a conversation between Joe Malik and John Dillinger:

"Thanks," Dillinger said modestly. "Actually, the Illuminati own the companies that put out most of the rock. We started Laughing Buddha Jesus Phallus to counterattack. We were ignoring that front until they got the MC-5 to cut a disc called 'Kick Out The Jams' just to taunt us with old, bitter memories. So we came back with our own releases, and the next thing I knew I was making bales of money from it. We've also fed information, through third parties, to Christian Crusade in Tulsa, Oklahoma, so they could expose some of what the Illuminati are doing in the rock field. You've seen the Christian Crusade publications—Rhythm, Riots and Revolution, and Communism, Hypnotism and the Beatles, and so forth?"

"Yes," Joe said absently. "I thought it was nut literature. It's so hard," he added, "to grasp the whole picture."

The Christian Crusade and its publications may sound like satire, but Shea and Wilson didn't make them up. I grew up in Tulsa, and visited the church once, as a field trip for my comparative religion class at All Souls Unitarian Church. The church's theology included a vigorous opposition to Communism. The church declined rapidly after accusations against its leader, the Rev. Billy James Hargis.  Back in 1974, to demonstrate that life can be weirder than fiction,  a man and a woman discovered on their wedding night that both of them had lost their virginity to Hargis. I wonder if RAW ever heard about that incident?

Anyway, I recently ran across a new book, The Hypnotic Communist: The Satanic Seduction of America, by W. Calvin Fields III. You can order it from Amazon.

A book by an author named W.C. Fields which inveighs against Hitler as a Fascist Communist sounds like an elaborate joke, but it appears the author is a real person, or at least as real as someone from Texas can be,  with apologies to my friend Gary Acord.

If you can't afford the book just yet, you can pick up some information from the author's blog, where I learned that the Russians did not hack the Democratic Party because, if you think about it, "Why would Moscow need to intervene at all when in reality, they have had one of their own agents running the business of the executive branch for the past eight years?"

I also discovered that the Democratic Party is "the front group for the Communist Party in America." Mr. Fields helpfully provides a citation from his own book to back up this assertion.