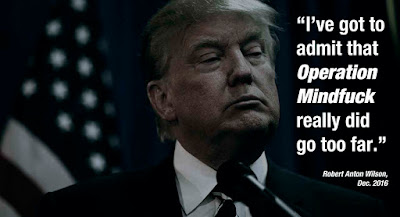 Robert Anton Wilson used to write a lot about how your level of happiness and productivity depended a lot upon you, and not outside events. For example, see this post in which he talks about choosing the novel you live in.

Now, obviously, you don't have much of a choice of novels unless you are reasonably healthy and have a decent standard of living. But there are also plenty of people who manage to ruin their lives for no apparent reason.

Val, the Butterfly Language writer, has a post from back in December that I relate to.

I do know, however, that if you go into 2017 believing that things will be shit and awful and etc., the Universe will kindly oblige you on that notion. And unfortunately, this seems to be the mass zeitgeist at the moment—and many people will help manifest that energy into reality, regardless of whether they ever consciously wanted to.

Note that it's not as if Val is a Trump fan.

I really dislike Donald Trump. His budget, which seeks to increase defense spending by $54 billion by slashing domestic programs, many of them actually useful, seems absurd to me. You don't have to remind me that he says a lot of dumb or terrible things.

But I've told my wife that I don't have to hear about every dumb thing Trump has ever said. Who would have enough time for that? More to the point, I want to write, read, listen to music, cook food, travel, and do other things I enjoy, without having to focus all of the time on what Sean Spicer said earlier today. I'm doing my bit to publicize the bad things Trump is doing, through my journalism and social media activity, and I joined groups such as the ACLU and Electronic Frontier Foundation this year as a direct reaction to Trump. But I'm not going to allow Trump to control my life.