Paperback release of 'Email to the Universe' announced 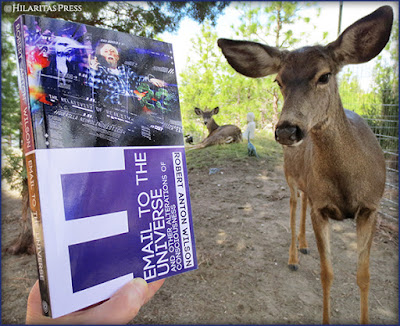 Not quite St. Francis preaching to the birds, but still interesting: Rasa presenting the new edition of Email to the Universe to California deer.

What that amounts to is you can buy it on Amazon and be assured  you'll be getting the new and improved Hilaritas Press edition, with new material by Michael Johnson and Paul Krassner, improved graphics and careful editing.

Excerpt from the announcement:

Dear friends of Bob,
The new Email to the Universe Print Edition is now available! This Hilaritas Press edition features a new introduction by R. Michael Johnson, a new Afterword by Paul Krassner, and intrepid assistance with editing and proofreading from Gary Acord and Tom Jackson. Amoeba's Fearless Scott McPherson has created another wonderful cover, and through the wonder of a good print job, for the first time the paperback of Email to the Universe has graphics that don't make the illustrator cringe. I know that for a fact because I was the illustrator (Rasa). The first printing in 2005 was disappointing, to say the least. I was thrilled to see the first proof of this new edition. After comparing the old with the new, I felt compelled to make an illustrative graphic. 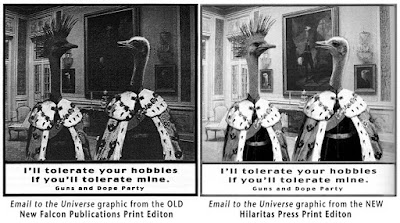 We're really excited about this new edition for all of the above reasons, but also because it's just a fantastic read. The chapters, Left And Right: A Non-Euclidean Perspective and The Relativity Of “Reality” seem urgently relevant in our current socio-political maelstrom. And before all the pasta-elevating ideas begin to congeal, you get to the only fictional essay in the book (or is it?), The Horror On Howth Hill, and suddenly nothing is an absolute reality, all is permitted . . .

Thanks so much for all your love and support!

Lots of love and lasagna to you all!

Help Cosmic Trigger Play: Send a Message to RAW from the Future...

Have you ever wished you could tell Robert Anton Wilson something? Maybe what his writings and thoughts have meant to you? Or something like 'thanks for that thing about ePrime' or even just 'thanks' or 'we love you, Bob'? If so, Daisy Campbell would really appreciate your help! Robert Anton Wilson's Cosmic Trigger, the play, is currently in pre-production. The team are beavering away, gearing up for their 23-date run in London in May. They want to hear - literally - from anyone who has something they would've liked to say to Bob. The message will be used as a vocal overlay on a scene where (spoiler alert!) an elderly RAW is in need of help with his medical bills and the love is pouring in through his letterbox in the shape of $23 checks. If you are up for helping to create this audio Bob Lovebomb, please leave a short message ...

Go to this link for the phone number and information about getting your tickets for the play, which will be in May in London.

One more important note: While you can buy the book from Amazon now, you will provide a higher royalty for Robert Anton Wilson's heirs if you buy the book from the CreateSpace link. The price is exactly the same at both locations, $15.23.
on March 29, 2017