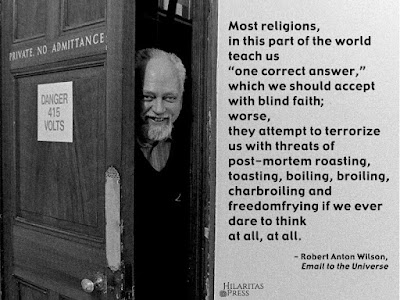 RAW liked to use the phrase "at all, at all," at the end of a sentence. I always wondered about this, and assumed that RAW borrowed the usage from living in Ireland, but I wondered further if the phrase had a deeper meaning for him based on some quantum variable, or some magikal process, or some Sirius connection, or was it his love of the unpredictable nature of Irish-English? Anyone brighter than me have a thought on this?

In Email to the Universe Bob writes, "The rest of us speak dry prose, the Irish speak playful poetry,"

Was Bob's use of "at all, at all" just his love of the Irish thought process, or did it also fit into some other part of his philosophy?