Where are we going? Where have we been? 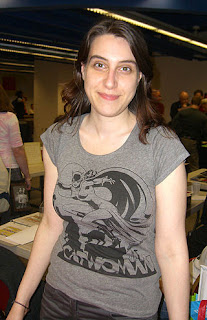 A couple of RAW fans look at the current situation, talking about how we got here and where we are going.

At the Supergee blog, Arthur Hlavaty argues that prejudice against women was a factor in Hillary Clinton's defeat. "Together with voter suppression and FBI & Russian meddling, that cost them the election," he suggests.

I wouldn't claim to be an expert on politics, but it seems to me a big factor also in last year's odd election, as Tyler Cowen has suggested, is that social media has undermined the power of elites in the two major political parties to direct events.

On the Democratic side, the establishment candidate almost lost to an old socialist. It's hard to remember now, but initially in the primary season, Bernie Sanders was seen as a "safe" challenger who was sure to lose but would keep leftists occupied until they fell in line behind Clinton.

Republican party leaders would have preferred any candidate to the Twitter president.

You can argue that Sanders would have been better than Clinton, but I definitely have to side with the elites in the Republican Party.

Meanwhile, at Butterfly Language, Val D’Orazio mentions that she has "a set of rather strong intuitions and convictions as to how the world is going to be within the next 3-8 years."

"The masses aren’t prepared for the immense magnitude of cultural, financial, and political shifts that will take place when emerging technologies like advanced AI, genetic engineering, and outer space mining/colonization become commonplace. This will all happen faster than the average person on the street (or browsing the internet) could ever possibly conceive of."

She also forecasts radical financial collapse, AI replacing many humans in jobs and many "Earth changes." Read the whole thing.
on March 09, 2017

Butterfly Language has quickly become one of my favourite reads.

The AI and automation question is very interesting. You can trace the first wave of automation back to the 1970's in factories. Back then, the assumption was that it would lead to a reduced working week, rather than the mass unemployment that followed.

There was an interesting article in The Atlantic the other day questioning a lot of what we take for granted with AI development - apparently it's often not as sophisticated as we are led to believe. That isn't to say that technology as it stands is not disruptive.

I love Rune Soup, but I feel Gordon's political analysis tends to veer into the conspiratorial; manipulation by unaccountable elites. Perhaps he's right, but my reality map is very reluctant to accept that kind of disempowerment.

I plan to read Gordon's book soon to see for myself what I think of it. He's an interesting guy.