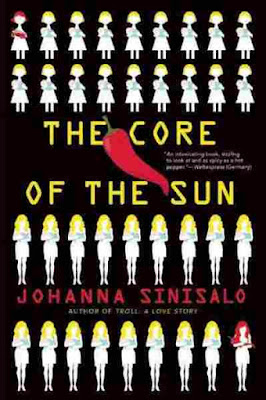 I recently finished up serving as a member of the judging committee for the Prometheus Award. Our committee is charged with coming up with a slate of nominees (after reading a pile of books). That will produce a list of finalists, akin to the finalists announced every year for the Hugo and Nebula awards, and then the general membership of the Libertarian Futurist Society will vote on those five (or so) nominees, and select a winner of the Prometheus.

I can't talk about our deliberations and I won't tell how I voted on the nominees, but  after reading a bunch of science fiction novels, I can recommend a few books without giving you a ranking:

The Core of the Sun, Johanna Sinisalo. An unusual dystopia about a totalitarian Finland which bans not only drugs and alcohol, but also hot peppers. The Worldcon is in Helsinki this year, and Sinisalo is the local star. You can read my interview with her.

The Mandibles: A Family, 2029-2047, Lionel Shriver. Leftists got to see what a prominent mainstream novelist could do with science fiction with Margaret Atwood wrote The Handmaid's Tale. Now libertarians get to read an offering from prominent novelist Lionel Shriver (We Need to Talk About Kevin). Her fine novel depicts a family's struggle for survival after the collapse of the U.S. government.

Too Like the Lightning, Ada Palmer. I found the advocacy of censoring in Palmer's utopia problematic, but I liked some of her other ideas, and I thought this was one of the best SF novels I'd read in the past few months. Read my review. The sequel to this has just come out, and I plan to read it soon.

Arkwright, Allen Steele. An old-fashioned SF novel about a science fiction writer from the Golden Age who leaves his estate to a foundation that pursues interstellar travel.

The relevance to this blog (other than the fact that readers of a blog about an American writer might want to hear about other books to read) is that the only literary award Robert Anton Wilson (and Robert Shea) ever received, as far as I know, was a Prometheus Hall of Fame Award for Illuminatus! The Libertarian Futurist Society welcomes new members; find out more here.

I'm reading Too Like the Lightning right now and am in love with it. Holy shit! It is so amazing. I would love to converse or debate (so far I'm totally on the side of this new utopia.) about the book sometime.

The Mandibles is on order.

I finished TC Lethbridge at the beginning of the week and will have it in the mail tomorrow.