Ted Hand on RAW and 'mansplaining' 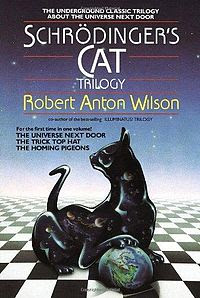 From Wikipedia: Mansplaining is a portmanteau of the words man and explaining, defined as "to explain something to someone, typically a man to woman, in a manner regarded as condescending or patronizing."[1][2] Lily Rothman of The Atlantic defines it as "explaining without regard to the fact that the explainee knows more than the explainer, often done by a man to a woman",[3] and feminist author and essayist Rebecca Solnit ascribes the phenomenon to a combination of "overconfidence and cluelessness."

On Facebook and on Twitter, Ted Hand argues that Robert Anton Wilson's work can shed light on the phenomena: "Mansplaining is a useful term because there are gender dynamics involved in the specific form of patronizing or condescending it describes. Failure to recognize these dynamics strikes me as a classic failure of what Bob Wilson called an intelligence test. Bob himself had no problem accepting this basic element of primate dominance dynamics and dramatized mansplaining in several scenes of his novels (see for example the Blake Williams stuff in SC trilogy.)"

On Twitter, Ted adds, "Reread the Blake Williams mansplaining to his female student stuff and you'll see what I mean. There is plenty of expose of sexism in illuminatus! as well, see for example Mavis."