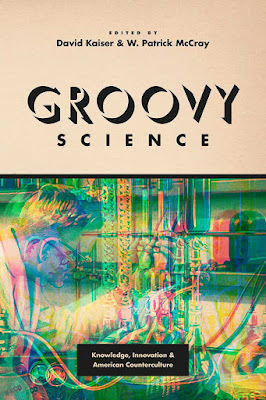 Boing Boing, the website that grew out of the best magazine in the world, has published its 2016 Gift Guide for Books.  There are several titles here that might interest Robert Anton Wilson fans.

One of the reviewers, Mark Frauenfelder, is a longtime Robert Anton Wilson fan, and reviewer Cory Doctorow is an important writer for me, and I want many of the books they mention, but I also noticed that many of the titles that seemed interesting were recommended by David Pescowitz.

Groovy Science: Knowledge, Innovation, and American Counterculture is one of the books Pescowitz recommends. It's a collection of pieces edited by David Kaiser (of How the Hippies Saved Physics fame) and W. Patrick McCray. Pescowitz writes, "In the late 1960s and 1970s, the mind-expanding modus operandi of the counterculture spread into the realm of science, and shit got wonderfully weird. Neurophysiologist John Lilly tried to talk with dolphins. Physicist Peter Phillips launched a parapsychology lab at Washington University. Princeton physicist Gerard O'Neill became an evangelist for space colonies. Groovy Science: Knowledge, Innovation, and American Counterculture is a new book of essays about this heady time!"

The table of contents reveals a piece by McCray called "Timothy Leary's Transhumanist SMI2LE" which has several mentions of Robert Anton Wilson.

Thanks to Chad Nelson for the tip.