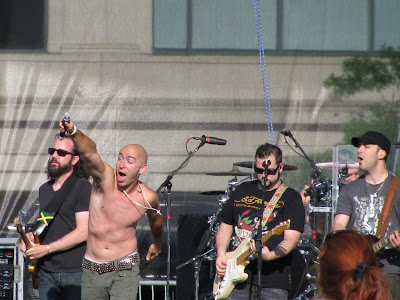 Everyone once in awhile, although I mostly listen to classical music these days, I feel an impulsive hunger to listen to a particular rock group. Suddenly, I need some Rolling Stones, or whatever. On Monday, I felt a sudden desire to listen to the rock group Live. So I started blasting out "Pain Lies on the Riverside," which I consider a great song, and some of my other favorites.

Live is from York, Pennsylvania, an old town (by American standards) and that in itself is a mild synchronicity. I can only think of a couple of bands from the 1990s that I really have followed. I visit York a couple of times a year because my wife's sister lives there. Her kids know some of the kids from one or two of the band members.

But that's not really what I wanted to talk about. I don't usually listen to rock music in my living room as  my wife doesn't want to hear hard rock in the evening at home. But I had to hear Live! So I listened to them for the first time in months.

And eventually, I got curious for an update on the sad story of the band. In the way of rock stars, the lead singer had a falling out with the rest of the band members, so they went their separate ways. So I pulled out my phone to see what was going on with them. And I discovered, to my surprise, that the band had just announced, a few hours ago, that they had all gotten back together.

This reminds me of how Gary Acord, without meaning to, had marked Leonard Cohen's passing. He wrote about it recently:

"Last night my youngest seemingly randomly pulled up Leonard Cohen singing 'Hallelujah' on youtube on his phone.  I’ve mentioned this to Oz before,  that’s sort of become our family tune.  It’s the one tune that if anyone starts playing it or singing it, everyone joins in with whatever instrument gets picked up and the world disappears for a few minutes.  So, anyway, he and my wife started singing along.  I hummed along.  When it was over I asked, for no obvious reason, 'Is he still alive?'  They were both gobsmacked and said 'of course!'  Then my son googled it up…  he had started playing the youtube video within minutes of the death of Leonard’s body.  So, no choices, to the music room the three of us marched.  I grabbed my guitar and we gave the old fart a proper send off.  It was good for us.  Don’t know if he noticed."
on December 13, 2016