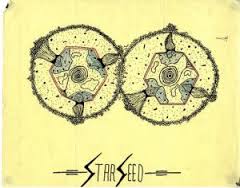 It's taken awhile, but it appears that Starseed Signals, a Robert Anton Wilson book written in 1975 during a period of close collaboration with Timothy Leary, finally will be out soon.

The final touches are being put on the production by the publisher, RVP Publishers, and the book is supposed to be out during the first or second quarter of 2017, according to information given by the publisher to RAW fan Chad Nelson.

RAW and Discordianism scholar Adam Gorightly rediscovered the book and wrote a foreword for it. And although the book was never published, it formed the basis for later work, Gorightly writes in his foreword: "Starseed Signals laid the foundation for RAW’s landmark work Cosmic Trigger, The Final Secret of the Illuminati, so don’t be surprised if some of the passages in this book seem familiar, to be later lifted and inserted into the Cosmic Trigger narrative."

This appears to be a substantial work, more than 340 pages of text. I can't wait to read it, and I'll provide more news as it becomes available.

This sounds like an interesting book. I bought a copy of "Terra II: The Starseed Transmission" which I enjoyed, be good to see the contributions by Wilson.