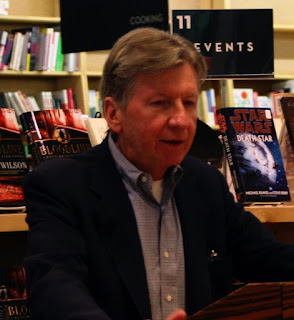 And so now I've just finished a novel by Dr. Wilson about two conspiracies, each centuries old, battling each other on multiple continents.

No, not that Wilson. I'm talking about F. Paul Wilson, and his new novel, Panacea, which is about a medical cure jealously guarded by pagans. Their enemies are a fanatical Christian sect called 536.

I'm struck by the fact that more than one science fiction writer named Wilson likes to write about secret histories and conspiracies. In form, F. Paul Wilson's latest novel (and his other novels) are more like Robert Shea than Robert Anton Wilson. They are straightforward, carefully plotted thrillers, and as Panacea shows, F. Paul Wilson has gotten quite good at it.

Incidentally, both Wilsons are influenced by H.P. Lovecraft. One of the protagonists in Panacea fears that Earth is being manipulated by an advanced alien civilization, and that the cure-all substance that defies scientific explanation was supplied by the aliens.
on December 27, 2016