How do you talk about RAW? 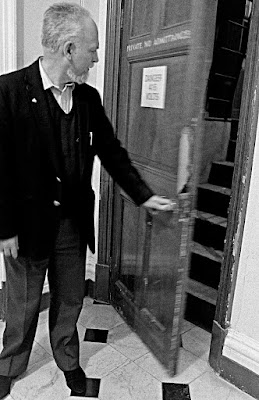 The other day, I was talking to my wife at dinner, and she brought up the planned July 23 performance of the Cosmic Trigger play in Santa Cruz, California.  (God willing and the creek don't rise, as they say, but I plan to be there for the performance.)

My wife asked why the performance would be scheduled to take place on a Sunday, and I explained that July 23 is Robert Anton Wilson day, as proclaimed by the mayor of Santa Cruz, where Wilson once lived.

My wife did not ask the next question – why that particular day? – and I admit I did not volunteer an answer. ("Well, that's the day, as described in Cosmic Trigger, that he thought he might have been contacted by beings from Sirius. He was doing a lot of drugs and occult activities at the time ... ")

Without taking time for context, it can be hard to describe to normal people why Robert Anton Wilson's work has such a powerful hold on the people interested in him. How do you guys do it?

While pretending to be normal too tell normal people that he's really funny and give/lend them a copy of Illuminatus! If they refuse to take the book hit them in the face with it. Works every time.

"You know how the quantified self stuff is a big deal now? It's people doing 'scientific' work on themselves and their friends, ya know, a DIY pragmatic, let's avoid experts for now and see what happens when we try to lose weight using Fitbit, or whatever. Well...Wilson wanted to know what would happen if a person pushed their mind to extremes. the only ethical experiment he could do was on himself. So: intense readings in dense texts like FW, Cantos, Korzybski and many other books; LSD, Crowleyan magick, yoga, tarot cards...anything! He got to a point, in July off 1973, the 23rd to be exact..."

By then, their pupils are dilated and they're listening.

Thanks for your insight for the great written piece. I am glad I have taken the time to read this.Very well written information. It will be precious to each one who uses it, as well as myself. Thanks a lot!
custom essay writing service

James (Imperialist) Lackey appears to be peddling something.

Tom--you aren't a Greg Brown fan by any chance are you?

What to say about this new term all
happywheels2.org||total jerkface||
happywheelsunblocked.in||happywheelsdemo.in||
slitherio