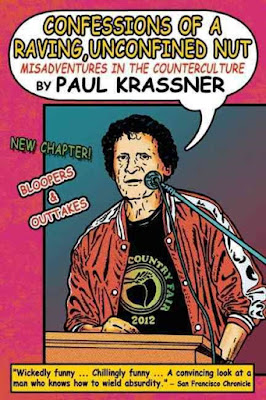 And now, I explain why Robert Anton Wilson fans would be interested in Paul Krassner's Confessions of a Raving, Unconfined Nut, which I've been reading.

In his collection Coincidance: A Head Test, Wilson wrote, "Paul Krassner's iconoclastic journal, The Realist, has published more of my writings than any other American magazine, and there was a period in the late 1950s and early 1960s when I might have given up writing entirely if Paul had not gone on publishing my work. I think everybody in the 'counterculture' owes a great debt to Paul Krassner, but I perhaps owe him more than anyone else."

Here is the first mention of Wilson in Confessions, which explains how Wilson got the byline we all now know:

"Another writer, Robert Wilson, editor of the Institute for General Semantics Newsletter, gave himself a middle name, Anton, for his first published article in The Realist, 'The Semantics of God,' in which he posed this suggestion: 'The Believer had better face himself and ask squarely: Do I literally believe 'God' has a penis? If the answer is no, then it seems only logical to drop the ridiculous practice of referring to 'God' as he. Wilson began writing a regular column, 'Negative Thinking'."

There are other references to Wilson in the book, too.

I picked up The Realist in the early 60s, when I was an undergrad, thus discovering Krassner himself, RAW, and Albert Ellis. It made me what I am today in many ways.

Krassner was often introduced as "The Father of the underground press" when he made public appearances, and Paul would automatically yell out, "I demand a paternity test!."

He learned a lot from Lyle Stuart, another maverick publisher.