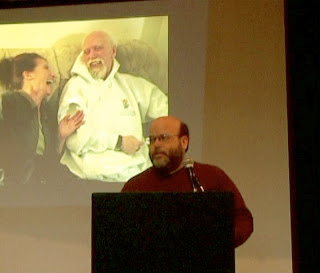 Eric Wagner, who trained for the Jeopardy quiz show by becoming an expert on Robert Anton Wilson. 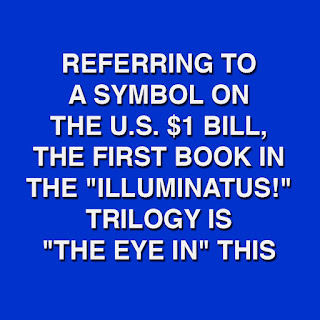 Illuminatus! was involved in the answer to a question on the Jeopardy! quiz show in the U.S., on a show that aired on Thursday.  (Under "Literary Structure." Hold your cursor over the prize amount to see the answer.)

Hat tips, Bobby Campbell (who kindly made the graphic that I used to illustrate this blog post) and Michael Johnson.

Speaking of Jeopardy!, I can now offer definitive evidence that reading the works of Robert Anton Wilson makes you smart. How smart? Smart enough to win a quiz show!

We know Jeopardy champ Eric Wagner as the author of An Insider's Guide to Robert Anton Wilson, but he's also a guy who walked away with $12,001 as a Jeopardy champion. The Jeopardy archive identifies Eric as "a high school English teacher from Corona, California." Eric won on Nov. 30, 1999, but lost on the next show, probably to another RAW fan.  I wish I could see the shows.

I got to talk on air about E-Prime and Aleister Crowley.

Christopher Jordan has some theories on pyramid power that Ben Carson should read about before he is sworn in as president. I am reading DuQuette on the Thoth Tarot right now. E-Prime and Crowley, good stuff. Was it with Alex Trebek

That's amazing!! Jeopardy was my Granny's fav show, to the point of obsession, and so I grew up w/ an inflated sense of its importance. Eric seems even more the hero now! Also, 11/30/1999 was my 19th birthday :)


Another pyramid question....answer....whatever.
I never realized all the games were online like this...cool.

"The Hound of the Baskervilles"


What is Voltaire...CandideÈ
my keyboard is stuck on french mode...
i wouldnèt get past the buzzer training!