Oz Fritz on the Paris attacks 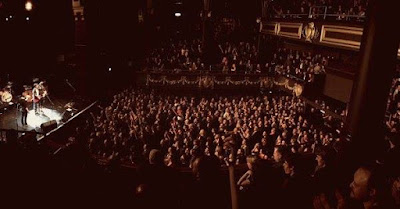 The Eagles of Death Metal performing at the O2 Institute in Birmingham in the UK, a few days before the band's Paris show. I did a double take on the near synchronicity while pulling the photo to illustrate my piece on Oz's post — I thought for a moment it was at the "Oz Institute."

Oz Fritz has responded to the Paris attacks with a new post on his blog, "Freedom vs. Fascism."

Alluding to the attack on a club where the Eagles of Death Metal were performing, Oz writes, "About six weeks ago I wrote: 'The amorphous violent war/jihad of terrorism from any kind of ideological fanaticism also declares a war against music.'  The attack on music is now as direct and literal as it gets."

On the band's Facebook page, which I linked to above, fans who were at the Paris show comment on the band's latest posting. Claude Pfeiffer writes, "Hello I was there in The Bataclan, I have the chance to be just wounded, some friends are dead, it's hard to realize that horror ... " Maxime Douriens writes, "They tried to kill me and my wife while dancing in front of our favorite band, thankfully they failed."


I was noticing from many days that your blog is helping too many readers as your articles are easy to understand and helpful to us.
I think you should explore the articles on your website, You should also cover different different categories for articles as you writes awesome. Thanks for sharing this great article with us.