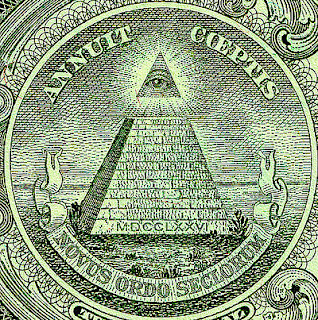 Pyramids have been in the news in U.S. politics lately, giving Jesse Walker the chance to explain another fine point of Illuminati symbolism to the readers of Reason magazine's "Hit and Run" blog. Henry Wallace, one of Illuminatus! character Franklin Roosevelt's vice presidents, was, Walker explains,

the man who persuaded the president to add the eye-in-the-pyramid symbol to the country's currency, thus giving ammo to everyone out there who thinks the Illuminati control the money supply.