The preservation of a dying woman's brain 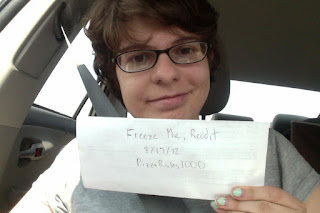 In Cosmic Trigger, Robert Anton Wilson describes how his daughter Luna  was brutally murdered, and how friends in the Bay Area Cryonics Society helped the Wilsons freeze Luna's brain, in hopes that someday some way would be found to bring her back to life. (I've linked to the American Cryonics Society, but that's what the group is called now.)

The New York Times has just published the story of Kim Suozzi, a young woman who knew she was dying of cancer and who decided, with the help of her boyfriend, Josh Schisler, to have her brain frozen by Alcor.

I saw nothing in Amy Harmon's piece to suggest that the couple was directly inspired by any of Robert Anton Wilson's writings. But the couple clearly ran in some of the same libertarian circles as RAW and many of his modern fans:

"Josh, a political science major, fell in love with Kim, an agnostic science geek, shortly after encountering her freshman year at Truman State University at a meeting of the College Libertarians. There, in the fall of 2007, they bonded over a dislike for the U.S.A. Patriot Act.

"Kim, whose dark good looks came from her father, had a crush on someone else. But Josh, tall, blond and self-confident — occasionally overconfident, Kim would note — persuaded her to be his canvassing partner for the presidential campaign of Ron Paul."

I've heard conflicting stories about the freezing of Luna's (Patricia's) brain. And I know the Bay Area Cryonics Society was involved, but I think Alcor was involved, as well. (ALCOR may have actually been doing the freezing.) Dr. Bob Newport, who passed on the Discordian Archives to me,and a good friend of RAW's, was on the board of Alcor and was also trained in the procedure, and probably was part of the team involved...he told me one time that they got the body (or brain?) too late to preserve it. However, he might have been thinking only of the body, and perhaps they were actually able to freeze the brain.(?) So I'm not clear on any of this, and when I have an opportunity to talk to the estate, I'll try to get some clarity...I know RAW said they did freeze the brain (or that's what I recall from Cosmic Trigger), but like I said, there seems to be conflicting stories...

Here's a link I found about Patricia: http://www.alcor.org/cryonics/cryonics9207.txt

It states that "The long delay before freezing the brain (in the
neighborhood of 36 hours), and some injury that occurred in the murder, raises a serious question of whether the "original" person can ever be recovered. "

Perhaps that's what Dr. Bob Newport meant when told me that they'd received Patricia's brain too late to preserve it, in his opinion.