Is Thomas Pynchon publishing under a pen name? [UPDATED] 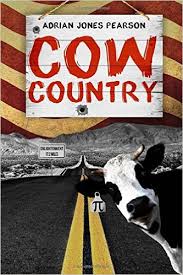 Given that Illuminatus! is often compared to the works of Thomas Pynchon, here is a conspiracy theory that is too good not to share:  Thomas Pynchon may have published a new novel this year, Cow Country, using the pen name "Adrian Jones Pearson." Alas, the claim is likely wrong.

This theory is advanced in a Harper's magazine blog posting by Art Winslow.  The amusingly bogus author web site is here.

Harper's is apparently not interested in telling us who Art Winslow is, although he may be the former literary editor of The Nation magazine.

The Wikipedia article also offers the rather less glamorous explanation that it's written by one Jacob M. Appel, and there is some interesting evidence to support that claim. (Someone named "J. Appel" previously registered cowcountry.com. The Pearson site is at coweye.org.)