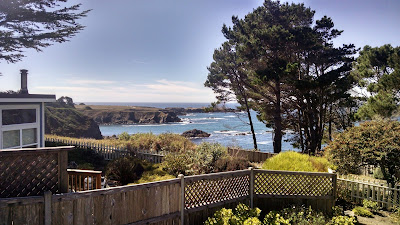 California already seems like a pretty cool place to me. I'm on vacation; the above photo is a view of the Pacific Ocean, a picture I snapped on my cell phone while standing on the deck of the house we are renting in Mendocino.

But the state is about to become even more cool, with the announcement from Daisy Eris Campbell that she is bringing her Cosmic Trigger play to California.

So here's the plan, Seekers - hot on the heels of a UK reprise, we plan to be in Santa Cruz on July 23rd 2017 performing Cosmic Trigger.

The place is where Bob lived and died; the year is the ten year anniversary of his death; and the day is not only the anniversary of his contact with Sirius, but also the official Robert Anton Wilson Day as declared by the mayor of Santa Cruz. If ever there was a day and place for the ultimate Discordian pilgrimage, this is it.