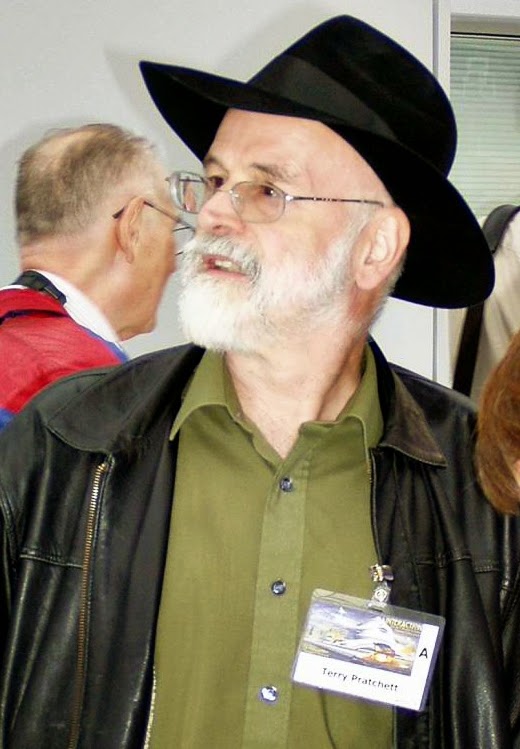 Terry Pratchett at the 2005 Worldcon in Glasgow

Although I've read science fiction and fantasy all my life, I was a bit late in getting to the late, great Terry Pratchett and his Discworld novels. Still, I read Snuff and I am currently reading Raising Steam.

I was chugging along in Raising Steam the other day when to my surprise, I came across a passage about Eris, the goddess of discord and Discordiana (although renamed "Pippina"). Pratchett didn't believe in chapters, but the incident occurs on page 102 of the U.S. hardcover, and it comes as part of a philosophical discussion between the characters Ridcully and Lu-Tze.

After Lucy — sorry, Lu-Tze — complains that his friends "are fixated on the idea that the universe can be totally understood, in every particular jot and tittle," Ridcully remarks,

It seems that even the very wise have neglected to take notice of one very important goddess ... Pippina, the lady with the Apple of Discord. She knows that the universe, while it requires rules and stability, also needs just a tincture of chaos, the unexpected, the surprising. Otherwise it would be a mechanism — a wonderful mechanism, ticking away the centuries, but with nothing different happening.

Lu-Tze responds to this with statements that include, "And so, my friend, I think we say hail Pippina and the occasional discord."

Hail Eris! All hail Discordia! If all this isn't a shout out to Discordians and/or Illuminatus! fans, we're getting some mighty coincidental writing here.

Pratchett was fond of puns, so perhaps there is a hidden pun in the passage — a couple of characters in a Discworld novel are Discordians.

"As with the number 23 in Robert Anton Wilson's Illuminatus! novels, there appears to be a certain metaphysical or perhaps even occult dimension to the repeated occurence of this number in the works of Terry Pratchett." The number in question is 57. This strikes me as a joke on the mystic number 57 on the Heinz bottles, but who knows.
on May 01, 2015

There was recently a good multi-actor audio recording of that Eric.
2 small bits in Discworld books reminded me of Robert Putney Drake's remarks on Privilege at a CFR banquet in Illuminatus!
“That's the way it was. Privilege, which just means 'private law.' Two types of people laugh at the law; those that break it and those that make it.” - Night Watch.
and
"It was about privilege, and young Vimes had hardly worn in his first pair of policeman's boots when his sergeant had explained what that meant. It meant private law. In those days an influential man could get away with quite a lot if he had the right accent, the right crest on his tie or the right chums, and a young policeman who objected might get away without a job and without a reference. It wasn't like that now, not even close." - Snuff.