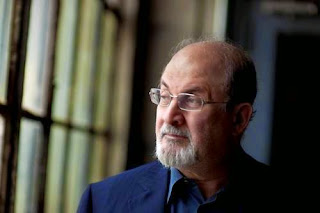 When the free market professor in the economics department said he was becoming a woman, the dean deadpanned, ""Thank God! I thought you were going to tell me you were converting to socialism!"

Orson Welles would have been 100 Wednesday. Excerpt from the new F.X. Feeney biography.

Salman Rushdie on the PEN flap.

Has the U.S. become a dictatorship of double standards?

Aide to California attorney general busted over Knights Templar police force? A lot of RAW fans seem to be enjoying this story.

Northwestern U. sex researcher J. Michael Bailey - a Galilean scientist, according to Alice Dreger in her new book, _Galileo's Middle Finger_, wrote a book called _The Man Who Would Be Queen: The Science of Gender-Bending and Transsexualism_.

And he got CLOBBERED - at time with death threats - by some transsexuals. How dare he assert such a thing! And then Dreger finds these enemies of Bailey posing prettily and provocatively in their new bodies. One of them was Diedre McCloskey.

Here's Donald- who had become Diedrem but now writing in 3rd person as how Donald FELT before, as found in Dreger's research:

"When in 1994 he ran across _A Life In High Heels_, an autobiography by Holly Woodlawn, one of Andy Warhol's group, the parts he read and re-read and was sexually aroused by were about Woodlawn's living successfully for months at a time as a woman, not her campiness when presenting as a gay genetic man in a dress. Donald's preoccupation with gender crossing showed up in an ugly fact about the pornographic magazines he used. There are two kinds of cross-dressing magazines, those that portray the men in dresses with private parts showing and those that portray them hidden. He could never get aroused by the ones with private parts showing. His fantasy was of complete transformation, not a peek-a-boo, leering masculinity. He wanted what he wanted."
-from _Crossing: A Memoir_

The accounts of McCloskey, along with the worse Andrea James and Jill Conway, in their attack on Bailey's scientific research as shown by Dreger, was just one of many eye-opening stories in Dreger's book for me. Read _Galileo's Middle Finger_. RAW would've loved it.

Sorry about my glaring typos above, Tom.

It sounds like a fascinating book. I'll have to check it out.