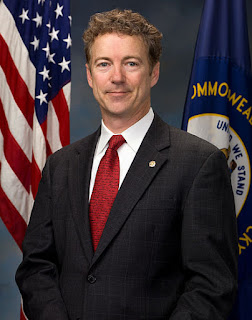 Thursday's Wall Street Journal had a perfect example of the kind of cynicism and dishonesty that pervades so much political rhetoric in this country.

The newspaper ran an opinion piece by Daniel Henninger: "Rand Paul Liberates the iPhone." As you can guess from the title, it's another WSJ piece about how unreasonable civil libertarians are for complaining that the NSA should not be allowed to spy on everyone. The whole piece is filled with nonsense, but I want to call attention to a sentence in the first paragraph:

Barack Obama’s miracle race to the White House notwithstanding, it’s always been a long shot that Rand Paul could jump from a single Senate term into the Oval Office. It’s now clear that he knows it, too. After experimenting with various policy thrusts, Kentucky’s freshman senator has fastened his candidacy to restricting the U.S.’s collection of telephone data about terrorist groups, such as Islamic State, which are transforming the Middle East into an apocalyptic, region-wide war. His awkward geopolitical timing makes this a long shot.

Notice how the smear and the lie, which I've boldfaced for your convenience, is casually inserted in what purports to be a factual piece in one of America's major newspapers. Without any citations, Henninger simply states that Paul opposes wiretapping Islamic terrorists. Gosh, Paul must be a crazy libertarian radical!

Of course, Paul has never said he opposes collecting evidence against terrorism, and he never would say such a thing.

Try to imagine, for a moment, that the Congress not only banned mass collection of telephone metadata by the NSA, but also required a warrant for intelligence collection in the U.S. (This is a more radical proposal than anything the Congress is likely to pass, but it would bring domestic U.S. intel into compliance with the Fourth Amendment).

Imagine an FBI agent who has evidence of Islamic terrorist activity asking a U.S. district judge for immediate authorization for a wiretap. Is there a district judge anywhere in the U.S. who wouldn't immediately agree? And are we supposed to believe Rand Paul would object to the FBI  obtaining the warrant?

Possibly related: Piece on Medium on "The Age of Disinformation."  Paragraph from the piece (by meteorologist James Spann) talking about the debate on climate change:

I do encourage you to listen to the opposing point of view in the climate debate, but be sure the person you hear admits they can be wrong, and has no financial interest in the issue. Unfortunately, those kind of qualified people are very hard to find these days. It is also hard to find people that discss climate without using the words “neocon” and “libtard”. I honestly can’t stand politics; it is tearing this nation apart.