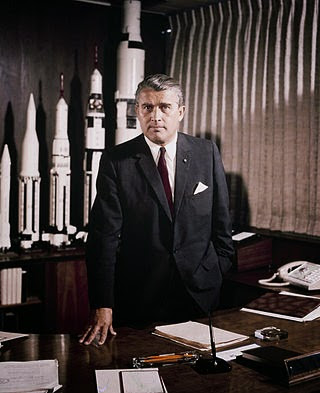 Werner von Braun, with models of the Saturn rocket.

I had summer jobs when I was a college student, too, but it wasn't anything as interesting as working for Werner von Braun. The always-interesting "hippie physicist," Nick Herbert, describes his summer job working for NASA in 1957, in Huntsville, Alabama, where about every week he would visit an office that had a "nuclear warheads" sign on the door. (At the time, Herbert was a physics major at The Ohio State University in Columbus, Ohio.)

Herbert discovered that traveling a few hundreds miles for a job in his own country could be a disorienting experience. "I look upon my trip to late '50s Alabama as my first visit to a foreign country," he writes. "Alabama in 1957 was indeed for me a foreign country, with its incomprehensible deep South dialect, its peculiar patterns of racial segregation, its colorful Bible-belt fundamental preachers on the stairs of the Huntsville Court House, born-again Baptist tent revivals in the countryside and the ever-present feeling in the air (and in the public statues of Confederate heroes) that for many residents of Alabama the War Between the States was still current news. I was often referred to as a 'Yankee'."
on May 17, 2015