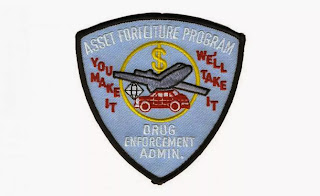 Yeah, they'll take it, all right.

I don't mean for this blog to take on too much of a "libertarian" tinge, but this is just outrageous: An aspiring music video producer, on his was to Los Angeles from Michigan, has all of his life savings stolen from him by the DEA.

The Washington Post article is full of amazing facts and quotes.

The agents found nothing in Rivers's belongings that indicated that he was involved with the drug trade: no drugs, no guns. They didn't arrest him or charge him with a crime. But they took his cash anyway, every last cent, under the authority of the Justice Department's civil asset forfeiture program ... "We don’t have to prove that the person is guilty," an Albuquerque DEA agent told the Journal. "It’s that the money is presumed to be guilty."
on May 14, 2015

Yuck. I hate this stuff. There was another terrible civil asset forfeiture story the other day about an elderly convenient store manager whose entire operating account ($107k) was confiscated under a subset of civil asset forfeiture laws called "structuring" violations. His crime? He deposited over $10k into his bank account in one transaction.

What's even more devious about structuring laws is that they're a racket between banks, local law enforcement, FBI & DEA. Even where there is no other evidence of drug activity, the simple act of making large cash deposits is sufficient enough for law enforcement to justify confiscation.

I'll probably write more about this at some point soon.

On a completely unrelated note - if anyone here has the chance to see the new HBO documentary "Cannibal Cop", I strongly recommend doing so.

Seems like something folks here would appreciate more so than the "average" viewer.

If you don't know Cannibal Cop's story, at least look it up on the internets.

The HBO film is called Thought Crimes: The Case of the Cannibal Cop, and I don't get HBO (can't afford it), so I'll have to wait. But after reading reviews it seems to dovetail with a recurring riff on my own blog about how I love "dangerous" or outre books, like Hit Man, which purportedly shows you how to become a contract killer. I like the personal "fantasy" element in these books; I have zero intention of acting on the "knowledge" contained in it. So far, the judge has ruled that the cannibal cop just did a bunch of Google searches on how to kill and cook women. He even met (or engaged online) with others who shared the same interest. Yet he DID NOT ACT.

I admit this seems even more extreme than having _How To Make Improvised Explosive Devices For the Coming Race War_ (a title I just made up, but would love to read, or even own if I saw it in a bookstore), but still: 1st Amendment!

As for the DEA's latest: how is this different from the Mafia or any other group of well-organized gangsters?