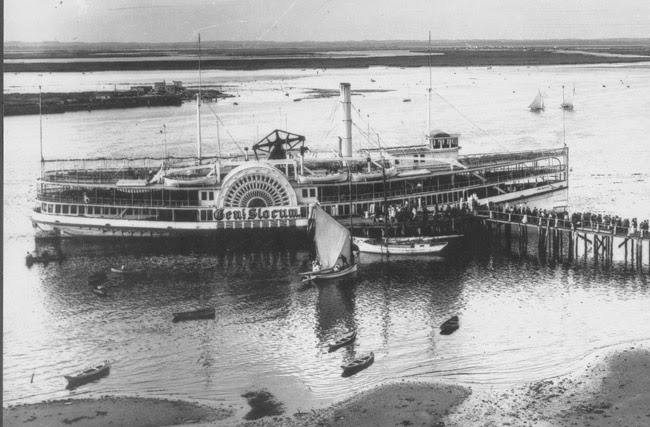 The General Slocum. As James Joyce scholar Jim Cartwright notes, the disastrous sinking of the ship that killed more than 1,000 people took place one day before the events of Ulysses, so people in the novel are reading about it in their newspapers.

Sheriff Jim Cash Cartwright, who I think is really working for Hagbard Celine, is one of the more interesting characters in Illuminatus. His lecture to Joe Malik, in its mixture of insight and B.S., is reminiscent of Mama Sutra's audience with Tobias Knight. It also pretty much captures the approach of the entire work.

"And it was hard to think that Cartwright was lying, since he knew so much about so many other things," page 585. I think that's the key. He's not lying, and he knows a lot, but the world is so vast that as we try to figure it all out, we can't get it all. It's also possible that he's blackening Hagbard Celine's name to provide cover for his own connection to Celine.

Toff's Character Breakdown for Illuminatus has this entry for Jim Cartwright:

(Key to the page references)

E=Illuminatus! Part I: The Eye in the Pyramid, Dell


to convert page numbers from the omnibus to those of the individual volumes or vice versa:

Here is an interesting passage from Cartwright's lecture to Joe Malik (pages 479-480):

"Well, sir," said Cartwright, "my basic finding is that life energy pervades the entire universe, just as light and gravity do. Therefore, all life is one, just as all light is one. All energies, you see, are broadcast from a central source, yet to be found. If four amino acids—adenine, cytosine, guanine, and thymine—suddenly become life when you throw them together, then all chemicals are potentially alive. You and me and the fish and bugs are that kind of life made from adenine, cytosine, guanine, and thymine: DNA life. What we call dead matter is another kind of life: non-DNA-life. Okay so far? If awareness is life and if life is one, then the awareness of the individual is just one of the universe's sensory organs. The universe produces beings like us in order to perceive itself. You might think of it as a giant, self-contained eye."

Cartwright went on. "Consciousness is therefore also manifested as telepathy, clairvoyance, and telekinesis. Those phenomena are simply non-localized versions of consciousness. I'm very interested in telepathy, and I've had a lot of success with telepathic research. These cases of communication are just further evidence that consciousness is a seamless web throughout the universe."

Compare with Scotus Erigena's "all things that are, are lights," which we've mentioned earlier, and while the "life energy" bit is possibly a stretch, this is pretty close to Robert Anton Wilson's own adaption of quantum mechanics to theories of consciousness; see for example the "Note" at the beginning of email to the universe: "I also suspect that this world shows signs of intelligent design, and I suspect that such intelligence acts via feedback from all parts to all parts and without centralized sovereignty, like Internet; and that it does not function hierarchically, in the style [of] an Oriental despotism, an American corporation or Christian theology."

H.L. Hunt, page 582, right wing, wealthy Texas oilman. According to the Wikipedia biography, the character of J.R. Ewing from "Dallas" was inspired by Hunt.

Thuggee: Now that "thug" has become a dog-whistle word for black guys, I am amused to recall that it's really Asian.

H.L. Hunt: As Wikipedia notes, this defender of traditional values had at least three wife-and-children setups. He bankrolled all sorts of anti-semitic and other hate groups and wrote a probably godawful novel called Alpaca about a utopia where people get votes according to how much money they have.

Conspiracy victims: Gabriel Conrad was a minor actor in the 50s. Google is not helpful with Hank Brummer.

Right after that and into p. 577 is a section with George framed by the spiritual chant, Hare Krishna, at the top with an animal-like chant, Harry Robot, at the tail.

p.578 " Mick Jagger hasn't even played 'Sympathy for the Devil' yet and already the trouble has started." - that's a real cultural landmark of sorts they've thrown in, it really happened that rioting used to start up when the Stones played that song. Awhile back I mixed it periodically with a band and strange things and sometimes trouble would occur particularly with Sympathy.

In the same paragraph the authors name-check Dylan then 2 pages later briefly discuss the movie "Gunga Din" Dylan has a lyric in "You Ain't Going Nowhere" - "Going to see a movie called Gunga Din."

A few observations from this section:

575--Anthrax Leprosy Mu--leading to Pi, which of course never resolves...

576--Henry Hastur, the only one who would have the gall to name himself after an Iloigor [lawyer Gore].--"You may all die. Are you afraid of death? You need not answer – I see that you are. That in itself may be a mistake. I have tried to explain to you about not fearing [hearing] death, but you will not listen. All your other problems follow from that."--The Illuminati goals seem not to far from the Leary/Wilson SMI2LE platform (Space Migration, Intelligence Increase, Life Extension), although their methods differ greatly. Perhaps it is this Fear of Death which explains the difference.

579--"Golden Apples of the sun, silver Apples of the moon," said cartwright with a smile.--Referenced Yeats' The Song of the Wandering Aengus, which refers to a Celtic god named Aengus Og, which means (believe it or not) Angus Young (AC/DC--more crazy synchronistic musical references!),

585--The language and music of the wolves.--Joe Malik's mysterious dogs!

@chas, Well yeah, I'm trying to be funny, but he Jim Cartwright does talk about Ulysses in this section.