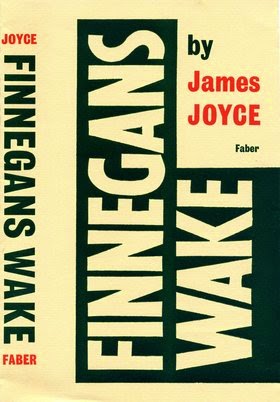 Znore at Groupname for Grapejuice plunges back into Chapel Perilous in part two of a series of articles that began with one I wrote about the other day.

The new post, among many other points, discusses the significance of the page numbers in the original edition of James Joyce's Finnegans Wake and about the use of the book as a prophetic text. Znore then writes,

If the page numbers are significant then dates can be determined from them. The first time I saw this type of correlation is of page 111 of the Wake with Robert Anton Wilson's death on January 11th.

...peraw raw raw reeraw puteters out of Now Sealand in spignt of the patchpurple of the massacre, a dual a duel to die to day, goddam and biggod, sticks and stanks, of most of the Jacobiters...

Lots of other interesting thoughts in the post, too.
on March 11, 2015

Thanks, Tom. I encourage people to follow the links to where I first came across this information -- PQ:

I am indebted to both of these Wakemeisters.

The "purple" in the quotation refers to me. RAW and I had our debate on May 29/93 on KPFK-FM:
For my bout with RAW, listen to this:

In the end RAW fainted but that's only proper since I'm referred to many more times in FW having had the advantage of being Marshall McLuhan's archivist (MM is mentioned in detail on p.254 [top paragraph]).

Sorry, my email is purple@fivebodied.com

I've been a member of the FINNEGANS WAKE SOCIETY OF NEW YORK for 22 years.

An incredible interview, Bob. I will pass this on.