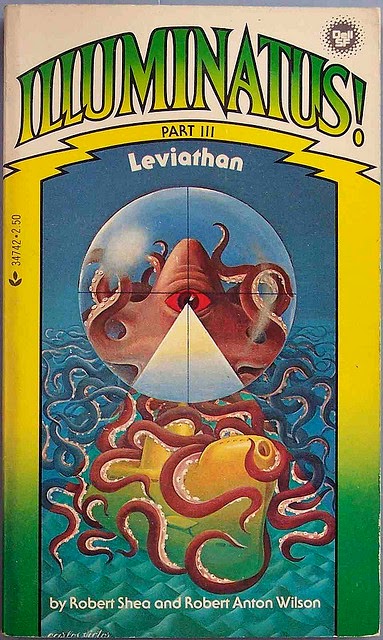 Chad Nelson  Chas reminded me that I had missed the Prologue in the comments for the last episode.

So I am pausing this week to give people a chance to read the Prologue (seven pages in the original paperback, and also available online here).

I apologize to everyone who has already read last week's "assignment" and is burning to post comments; please save them for next week when we will go ahead and cover page 575, "JUST LIKE A TREE THAT'S STANDING BY THE WAATER" to page 585, "AND HANK BRUMMER."

My reasoning for pausing at the Prologue is twofold (1) To provide a refresher on some points for folks who have come long on the journey so far and (2) to give a fresh opportunity for anyone who has dropped out along the way to rejoin the discussion. I don't want people who have dropped out, or who came to this late, to feel they have to complete two whole novels to take part and offer something. Read the synopsis and join the club.

My copy of the original mass market paperback of Leviathan, apparently printed in January 1976, has advertisements for three other Dell paperbacks in the back: Venus on the Half Shell by Kilgore Trout, Kurt Vonnegut's fictional science fiction writer (it was actually written by Philip Jose Farmer); The Cosmic Connection: An Extraterrestrial Perspective, by Carl Sagan, and TM: Discovering Inner Energy and Overcoming Stress, by Bloomfield, Cain, Jaffe and Kory.

My copy of Leviathan does not give credit for the cover, but it is almost certainly Carlos Victor Ochagavia.

Leviathan does not have a dedication.  The Eye in the Pyramid is dedicated "To Gregory Hill and Kerry Thornley." The Golden Apple is dedicated "To Arlen and Yvonne," i.e., the author's wives.

Good idea Tom. As to the cover art, if you look real carefully on the lower left side of the cover of The Golden Apple (Book II), you can see the name 'Carlos Victor' printed in light blue. Let me also say that I think the original cover art is incredibly appealing.

No doubt some far-out interpretations could be made in reference to de-coding this art work. To start, who is the face in the right side of the Golden Apple on the cover of book II?

Did you ever consider that I might also be the person you assume is Chas?

Drake, with a strange grin: “We deserve to die.” (He is quoting the last scene of Bride of Frankenstein, but George doesn’t know that.)

I wouldn't have known that either without this synopsis.

Oz--we find that out on page 350 (I am so glad that I am reading in such a crazy mixed up order).

Thanks Chas, I thought it was in there and that I'd forgotten.

I find it interesting that pre-1976 SF features sentient computers with names: HAL, Mike in The Moon Is a Harsh Mistress, FUCK-UP, etc. I don't know of anyone who names their computers these days.

I just finished Robert Stone's Hall of Mirrors (1964), which mentions both Fernando Poo and the Decembrists. I had never seen Fernando Poo spelled "Poo" instead of "Po" anywhere else except Illuminatus! before.