'Black Magic and Curses' by RAW? 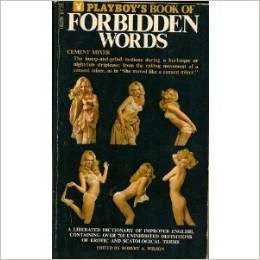 Jesse Walker — author, gentleman, Reason magazine editor, RAW fan, etc. — wrote to me recently to ask if I knew whatever had happened to Black Magick and Curses, Robert Anton Wilson's planned revised version of Playboy's Book of Forbidden Words. An announcement was posted on Usenet by one "Mark Chan," purportedly RAW himself.

"This was earlier in 2000, so perhaps the revised edition actually existed? (Or perhaps this was just to be the original uncut version, which would itself be quite a find?)," Walker asks. The Post Office box was the same as for Permanent Press, which put out the newsletter "Trajectories" and the book Chaos and Beyond, Walker found.

These kinds of inquiries to the RAW estate never seem to generate a  useful response, at least in my experience, so I tried Eric Wagner, who very well might know, and Michael Johnson, another RAW scholar.

"I don't think it ever appeared," Eric wrote back.

Michael said he doesn't know, either. He speculated that a manuscript might have been auctioned off when RAW. "I'm fairly certain this never appeared in any substantial way," he wrote.

I notice also that "Black Magick and Curses" is the name of a piece in Email to the Universe.

I'm sure it never was published; I just wonder if the manuscript exists.