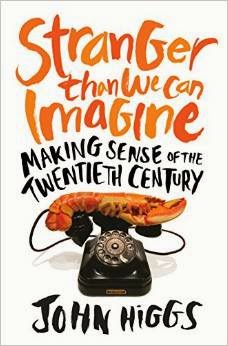 Above is the paperback cover for John Higgs' alternative history of the 20th Century, Stranger Than We Can Imagine: Making Sense of the Twentieth Century.  It is available for pre-order both in the U.K. and the U.S. (The lobster telephone presumably refers to Salvador Dali's surrealistic creation, although I'm hoping it's the phone John reaches for when you ring him up.)

Alan Moore is going to release a massive (non-graphic) novel next year.  Follow the link in the Times article for more information.  Moore also has an H.P. Lovecraft project that starts soon.

Not sure I can really relate this last bit to RAW, but the Elvis Costello memoir also comes out later this year.
on March 25, 2015