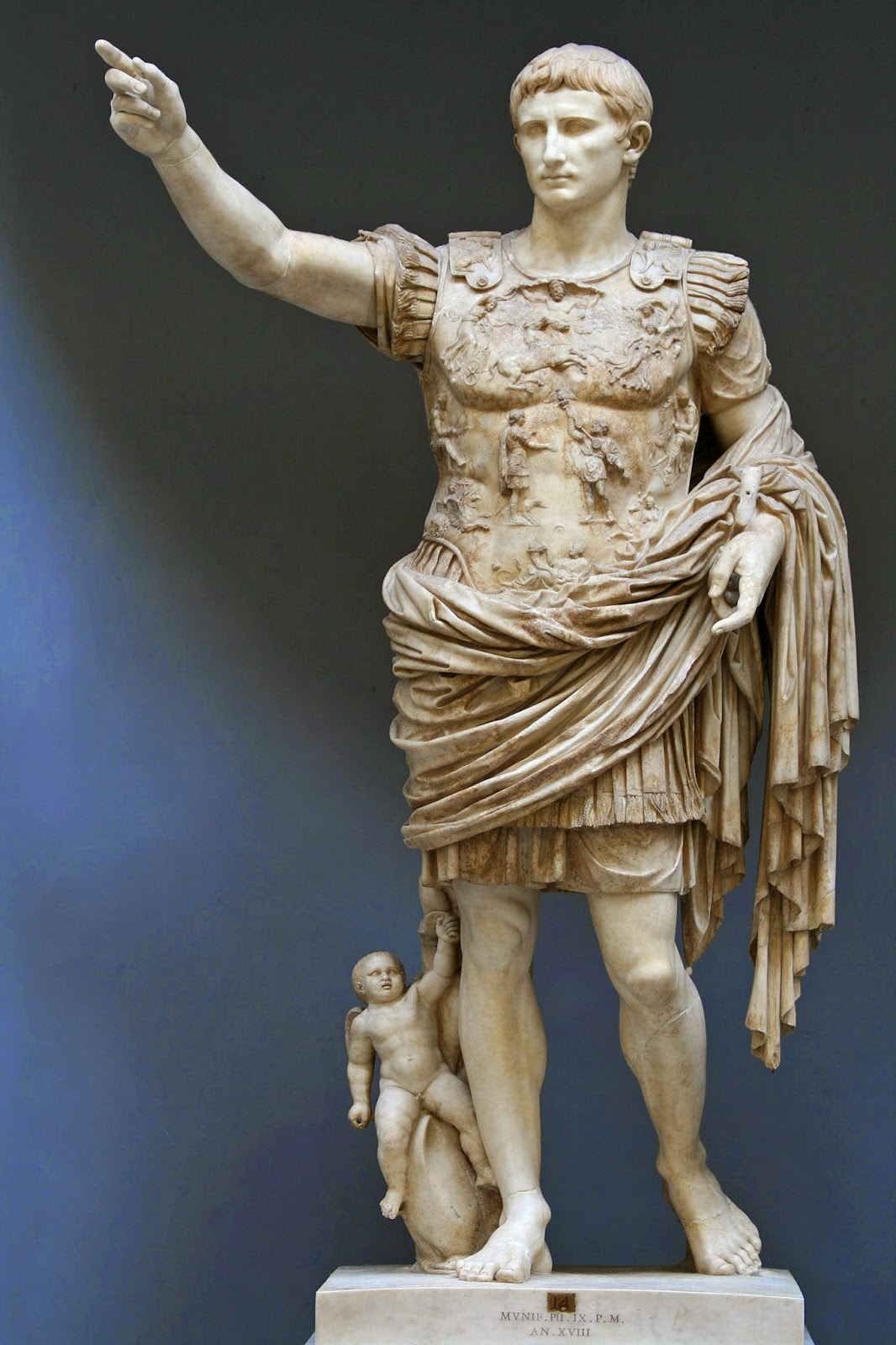 The Emperor Augustus, who tactfully allowed Romans to continue to believe they lived in freedom in a Republic.

When the Emperor Augustus became the first Roman emperor (27 B.C. to A.D. 14),  officially ending the Roman Republic and replacing it with the Roman Empire, the transition was carefully managed to hide the momentous change. The emperor did  his best to preserve many of the forms of the republic and to pretend that nothing had changed. He did not call himself a king but took the title of "Princeps," first citizen. He showed deference to the Senate, or at least pretended to.

In this section of Illuminatus! the authors explicitly compare the Roman Empire to the United States, suggesting that a similar transition from republican to empire also has been managed.

"Drake remembered his excitement: it was all as he had foreseen. The end of the Republic, the dawn of the Empire ...

"Drake read what was to become the National Security Act of 1947. "This abolishes the Constitution," he said almost in ecstasy.

"Quite. And believe me, Mr. Drake, by '46 or '47, we will have Congress and the public ready to accept it. The American Empire is closer than you imagine."

"But the isolationists and pacifists—Senator Taft and that crowd—"

"They will wither away. When communism replaces fascism as the number one enemy, your small- town conservative will be ready for global adventures on a scale that would make the heads of poor Mr. Roosevelt's liberals spin. Trust me. We have every detail pinpointed. Let me show you where the new government will be located."

Drake stared at the plan and shook his head. "Some people will recognize what a pentagon means," he said dubiously.

"They will be dismissed as superstitious cranks. Believe me, this building will be constructed within a few years. It will become the policeman of the world. Nobody will dare question its actions or
judgments without being denounced as a traitor. Within thirty years, Mr. Drake, within thirty years, anyone who attempts to restore power to the Congress will be cursed and vilified, not by liberals but by conservatives."

All of this fits nicely with Gore Vidal's novel, The Golden Age, which has been called "the Atlas Shrugged of historical revisionism."

The National Security Act of 1947, mentioned in the text, created the CIA, and began the creation of the secret national security state, which runs much of U.S. foreign and national security policy without having to worry very much about elections or what Congress thinks.

President Harry S Truman signed the bill, by the way, on a presidential aircraft, the Sacred Cow, oddly serendipidous with the Discordian Sacred Chao. Before he left office, Truman also created the NSA.

Comparisons between Rome and America are dangerous, of course,  but corruptions of power have parallels across the centuries. I would argue that the parallels between the Roman Empire and the American one have hardly weakened. The Roman Empire, as I remarked recently, essentially was in a state of endless war until the western empire fell. Endless war is current American doctrine.

Some of the institutional pressures are analogous. I recently read Rome's Gothic Wars by Michael Kulikowski, which states that even in the later empire (which was no longer expanding in size), emperors were under pressure to win victories against the "barbarians" to demonstrate their legitimacy. Modern U.S. presidents come under pressure not to appear "weak" and to placate the powerful national security establishment. On the pages of the Wall Street Journal, militarists are the "adults" in Washington, D.C.

Earlier in this section, as a kind of overture to the passages discussing the Roman and the American empires, there is a reference to the massacre of the Melians, a key moment in the passage of Athens, a democracy, into becoming a ruthless empire (page 339.) During the Peloponnesian War, the struggle between Athens and Sparta (and their allies) for the control of Greece, the Athenians in 416 B.C. demanded that the island state of Melos surrender and become part of the empire. In a famous passage in Thucydides unfinished history of the war, the Athenians explain that they aren't going to bother discussing the merits of each side -- it's time for the Melians to accept the realities of power and get the best deal they can (5:89,  Rex Warner translation, I've boldfaced the most famous bit):

Athenians: Then we on our side will use no fine phrases saying, for example, that we have the right to our empire because we defeated the Persians, or that we have come against now because of the injuries you have done us — a great mass of words that nobody would believe. And we ask you on your side not to imagine that you will influence us by saying that you, though a colony of Sparta, have not joined Sparta in the war, or that you have never done us any harm. Instead we recommend that you should try to get what it is possible for you to get, taking into consideration what we both really do think; since you know as well as we do that, when these matters are discussed by practical people, the standard of justice depends on the equality of power to compel and that in fact the strong do what they have the power to do and the weak accept what they have to accept.

Melians: So you would not agree to our being neutral, friends instead of enemies, but allies of neither side?

Athenians: No, because it is not so much your hostility that injures us; it is rather the case that, if we were on friendly terms with you, our subjects would regard that as a sign of weakness in us, whereas your hatred is evidence of our power.

In the end, the Melians refused to surrender, and when the siege was over, the Athenians killed the men and sold the women and children into slavery.

Incidentally, becoming a ruthless empire didn't work out so well for the Athenians; an unprovoked attempt to conquer Syracuse, the most powerful Greek city in Sicily, ended in disaster and resulted in Athens losing the war. The city survived, but it was never again a major power.

Page 342, "Campdown Races," we finally learn why the song recurs in; it's what Gen. Lawrence Stewart Talbot is singing as he prepares to commit suicide.

(Next week: Page 348 "Richard Jung, wearing Carl Jung's old sweater and smoking his pipe," to page 359, "and the sight of that miniature representation of the giant Tlaloc in Mexico City.")

Great write up Tom, some of it sounds reminiscent of the Philip K. Dick quote "The Empire never ended."
Pg.343 - I find this amusing: "...can still be saved if Congress will lock up those damned college kids for once and for all."
Pg.344 - There is a statue of Mary Wollstonecraft in London. I just found this which I thought was cool: http://www.theguardian.com/uk/the-womens-blog-with-jane-martinson/2011/nov/17/mary-wollstonecraft-statue-womens-blog

Yes, great write-up, thanks for the historical context and how it currently relates to the present Empire.

This section has quite a lot in the magick department as well.

The question gets asked so many times, 'What was it Jung said about power? that I had to google it and got this as the top quote by Jung about power:

“Where love rules, there is no will to power, and where power predominates, love is lacking. The one is the shadow of the other.”

p.340 Important information is given about intuition by Malaclypse in the last paragraph

p.344-346 contains a great deal of magickal information, the densest so far that I've seen in the book. Starting with, or a little before, Maldonado describing the original Illuminati as a woman's liberation front. Then they mention Mary Wollstonecraft's book "Vindication of the Rights of Woman" which nicely balances all the rights of Man business that opened this section after the author's dedication to their wives.

As I read it, much of p.344-346 metaphorically describes the trials and tribulations in Tiphareth heading north

p.345 "Lovecraft's words came back to him "I beg you to remember their attitude toward their servants" That was it, basically." - actually an incredible pun as well as a solution, discoverable by deciphering the word 'remember'

p.346 The Illuminati crushing Crowley and Willie Seabrook for revealing too much reads as high irony, to me, as these guys give it all away ... and in the very next two sentences, not to mention what was just revealed before.

On p. 325 Jung says, "He has not learned the important thing. That is of course how to avoid power."

On p.325 Jung makes that comment to one of his guests about Drake, but not to Drake. Later, in this section, Drake tries to recall what Jung told him about power. As far as I can remember, it's never said what Jung told Drake about power.

The emphasis on pg. 341 on Malaclypse's lack of a physical body reminds me of how the spirits in Dante's Divine Comedy also don't have physical bodies.

Reading about Anthrax Leprosy Pi takes on a new light thinking of the current fear of ebola. Lawrence Talbot suggests the Wolfman.

Reading about Luciano and the OSS on page 344 reminded me of the book Havana Nocturne, which gave some interesting background on the mob and the US government.

I had forgotten the notion of Hitler as a medium on page 346. He could get a reality show - Berchtesgaden Medium.

The comments about the National Security Act of 1947 on page 347 made me think about the progression to the Patriot Act.