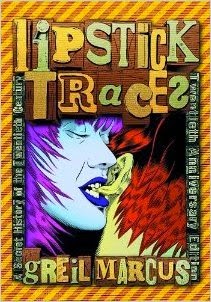 Greil Marcus, legendary Rolling Stone magazine writer and author of tomes such as Lipstrick Traces: A Secret History of the 20th Century and other books I haven't gotten around to reading yet, reviewed Iluminatus! for Rolling Stone back on Feb. 26, 1976. His official website has now posted the review. Here is the text:

With their Illuminatus trilogy (The Eye in the Pyramid, The Golden Apple, and Leviathan, Dell paperbacks, $1.50 apiece), Robert Shea and Robert Anton Wilson have if nothing else brought off the longest shaggy dog joke in literary history. To briefly summarize the more than 800 closely printed pages: a journalist, a sort of modern-day Candide, sets out to investigate some mysterious doings in Mad Dog, Texas, and innocently trips over one of the many feet of the Illuminati, the greatest conspiracy in history—or, to put it another way, the conspiracy that is history. Taking their cue from Ishmael Reed’s Mumbo Jumbo (“The history of the world is the history of warfare between secret societies”), Shea and Wilson catapult their hero and uncountable other characters through a series of adventures and in transit manage to clear up every conundrum currently bedeviling the Western mind, including the assassination of JFK (brilliantly handled), the death of Marilyn Monroe, the history of Atlantis, dolphin intelligence, the last words of Dutch Schultz (the touchstone of the books), prehistoric cross-continental cultural diffusion, the Loch Ness monster, the fate of Adolph Hitler, the death of John Dillinger, and a lot of other things I’ve forgotten. A hundred pages in I couldn’t figure out why I was wasting my time with this nonsense, after 300 I was having too much fun to quit, and by the end I was eager to believe every word—even if the only conspiracy really at work here is Shea and Wilson’s devilish exploitation of our need to make ordered sense out of everything under the sun; their exploitation, in a world, of the narcissism of rationalism. Anyway, I loved it.

That's a spot on review!