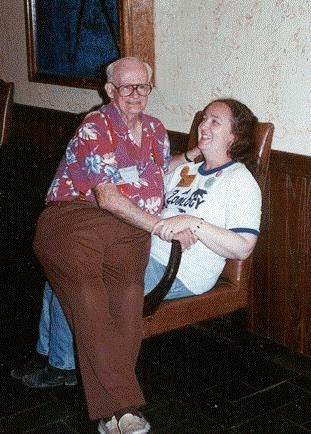 R.A. Lafferty, interacting with a fan, likely at a SF convention.

A couple of days ago, I did a blog post on R.A. Lafferty, one of my favorite authors.

Laffety's lifelong hobby was studying languages. He may have been the greatest linguist ever among science fiction writers. Lafferty scholar Andrew Ferguson told me Monday that Lafferty knew six to ten languages well, with a reading and speaking knowledge of about 10 more. Languages Lafferty knew well included Latin, French, Spanish, Italian, German and Dutch. He was pretty good in Gaelic, Malay, Tagalog and classical Greek, had a reading knowledge of modern Greek, and had some knowledge of Slavic languages, Hebrew and Arabic. "He at least sampled many others via language tapes and made headway in most; the one he could never quite grasp was Japanese," Ferguson said.

Many years ago, Lafferty gave me his advice for learning a language. Learn a foreign language by reading the Bible in the language you are trying to learn. It will be written in a simple style, and it will be easier because you already are familiar with the text in English, he said.

My Lafferty blog post was published on Friday. On Monday, in one of those coincidences that Robert Anton Wilson fans love, British historical novelist and science fiction writer Sean Gabb (i.e., Richard Blake) put up a new blog post, "How to Learn Greek and Latin."  Dr. Gabb's secret formula? Read the Bible! Gabb's arguments are similar to what Lafferty told me (excerpt, but read the whole thing):

The pagan classics are always loosely translated. You will not get far as a beginner by comparing the original with a translation. The Bible is different. It is invariably translated out of the original tongues by men who believe it is the revealed Word of God, and that the original must be followed absolutely. St Jerome made as literal a translation from Greek and Hebrew as his language allowed. So did the commissioners appointed by King James. Each version corresponds with the original. Leave aside slight variations between the originals, and each version corresponds with the other. And I had no need of a dictionary – often more confusing than useful for looking up meanings in a language of multiple and often irregular inflections and compounds.

Gabb is about to issue an edition of the "Acts of the Apostles" from the New Testament, with Greek and Latin texts as well as English.

Gabb offers several reasons for learning the two main languages of classical civilization. I will add one more, for RAW fans; they help in understanding James Joyce's works.

Let me offer an example that even I can provide, despite my ignorance of Latin (unfortunately, I only know a little, but I want to learn more). Stephen Dedalus' slogan for his attitude toward church and state is "Non serviam." This is usually translated from the Latin as "I will not serve."

That's accurate, but it also helps to know enough Latin to know that "servus" means not a servant, but slave. (It's apparently the origin of the English word "servile," as in behaving like a slave.) So what Stephen is also saying is that he refuses to be a slave. He is his own master. 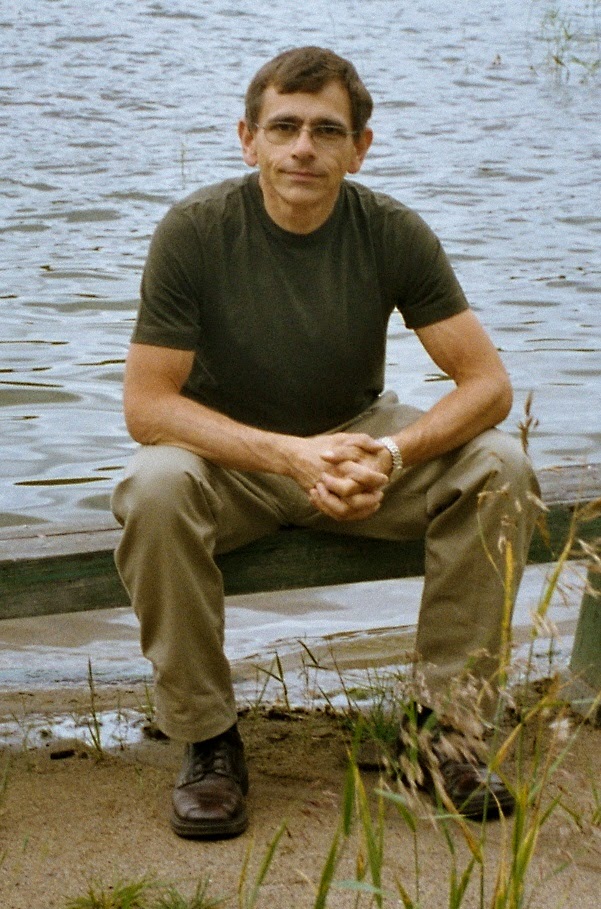 Here's one for ya: My girlfriend & I were recently at the local library's semi-annual book sale we she handed me a book she found called "Mi Primera Biblia"-- a children's bible in Spanish. She said "this might help you learn Spanish"...

Thanks for sharing Mr. L's advice for learning a language.

Sorry but I can't think of a WORSE way of learning a language.

Why so? If your objection makes sense, I will answer it in my introduction.