Maybe we need to build a new Temple of Janus 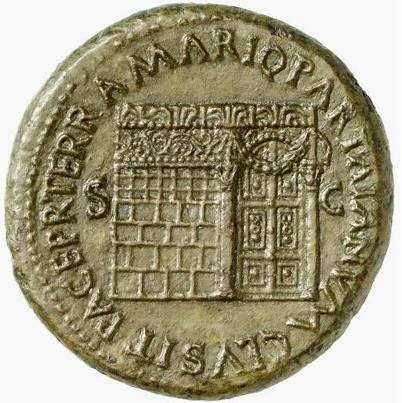 Roman coin with an image of the Temple of Janus.

In the days of the Roman Republic and the Roman Empire, the Temple of Janus in Rome's Forum was one of the most important temples. When Rome was at war, the doors were open. When Rome was at peace, the doors were closed. The Roman Empire was very warlike, and the door were almost always open. When they were closed, it usually wasn't for very long.

Maybe some philanthropist needs to build a new Temple of Janus in Washington, D.C., to provide a visual display of the fact that the American empire is almost always in a state of war. There's a good, new article by Glenn Greenwald at the Intercept about this ("Key Democrats, Led by Hillary Clinton, Leave No Doubt That Endless War Is Official U.S. Doctrine.") I wonder which libertarian dug up the Adam Smith quotation for him?

UPDATE: James Risen has been doing a lot of Tweets lately on this general subject, including this one.

Tim Leary recommended Arthur Koestler's book _Janus_. I started it back in the 1980's but didn't finish it.