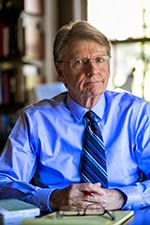 The part of the U.S. government that is sometimes referred to as "the national security state" or "the secret government" — the part that I talked about in my recent Illuminatus! online reading entry — usually is the focus of discussion for libertarians, anarchists, hardcore civil libertarians and other soreheads excluded from mainstream political discourse.

Now, however, the topic has drawn the attention of a respected political scientist and academic, Michael Glennon of Tufts University. His new book is called National Security and Double Government. Here is the Cato Institute's summary:

"In National Security and Double Government, Michael Glennon examines the continuity in U.S. national security policy from the Bush administration to the Obama administration. Glennon explains the lack of change by pointing to the enervation of America’s 'Madisonian institutions,' namely, the Congress, the presidency, and the courts. In Glennon’s view, these institutions have been supplanted by a 'Trumanite network' of bureaucrats who make up the permanent national security state. National security policymaking has been removed from public view and largely insulated from law and politics. Glennon warns that leaving security policy in the hands of the Trumanite network threatens Americans’ liberties and the republican form of government."

Most newspapers and media outlets are ignoring the book so far, but the Boston Globe ran a piece. The whole thing is worth a few minutes of  your time, but here is the part where Glennon explains the title of his book:

IDEAS: Where does the term “double government” come from?

GLENNON:It comes from Walter Bagehot’s famous theory, unveiled in the 1860s. Bagehot was the scholar who presided over the birth of the Economist magazine—they still have a column named after him. Bagehot tried to explain in his book “The English Constitution” how the British government worked. He suggested that there are two sets of institutions. There are the “dignified institutions,” the monarchy and the House of Lords, which people erroneously believed ran the government. But he suggested that there was in reality a second set of institutions, which he referred to as the “efficient institutions,” that actually set governmental policy. And those were the House of Commons, the prime minister, and the British cabinet.

The usual suspects have been trying to draw attention to Professor Glennon's book, but getting the attention of the public appears to be a work in progress. After I ran across mentions of the book from the troublemakers I follow on Twitter and read the Globe piece, I decided to check it out of the library. I discovered that it's not available from the CLEVNET library system (not just Cleveland, but much of northern Ohio.) Cuyahoga County's library system (28 branches) didn't have it, either, so I enlisted my wife, a librarian, to get it for me using interlibrary loan. She discovered that no libraries in Ohio have it. When I asked her to consider ordering it for her library, she discovered that Baker & Taylor, the main distributor supplying public libraries, didn't have any copies in stock.

So, you can see that buying a copy raises a public safety issue for any library in Ohio daring to do so; why attract the attention of the Illuminati? *

I can't afford to buy the book, but I'll pursue getting my hands on it and will talk about more when I can.

No, no, no. The super-intelligent dinosaurs inside the hollow earth rule everything. That G on masonic temples stands for Godzilla! Remember, Raymond Burr starred in the original American release of "Godzilla". Later he starred in "Perry MASON". It all coheres.

You can buy the new hardback on Amazon.com for $26.39 or get the Kindle
edition for $15.39. http://tinyurl.com/kcdxt5b If you can't afford to buy the book you need to ask your editor for a raise. BTW, it's the #1 bestseller in Foreign and International Law on Amazon, so the Illuminati seem to have fallen down on the job.

Then buy the hardcover. It's quite modestly priced for a new Oxford University Press publication.