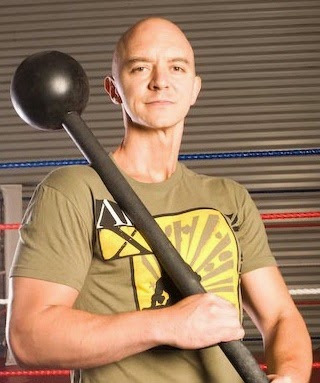 Jake Shannon (with his conditioning invention, the Macebell).

The format of the book is unusual. Part One is an autobiography, Parts Two and Three discuss his ideas on libertarianism and other topics, Part Four has surrealistic fiction and Part Five has poems. The book also has a recommended reading area discussing Robert Anton Wilson and other books readers of this blog might be interested in.

He's also written some other books: ENDonomics: Default, Deflation, Derivatives & the End of the United States As We Know It, Physical Chess: My Life in Catch-As-Catch-Can Wrestling (as a contributor to Billy Robinson's book), The Hypnotist: Healer, Head-Hacker, & Headliner, Say Uncle!: Catch-As-Catch-Can Wrestling and the Roots of Ultimate Fighting, Pro Wrestling & Modern Grappling , and Tea-O-Conned: The Hijacking of Liberty in America: Exposing the Neoconservative Infiltration and Takeover of the 21st Century Tea Party Movement.

On his Facebook page, Jake says he is a "Hypno-Wordsmith, Catch Wrestling Revolutionary and Anarchist Financial Engineer." He's interested in Zen Buddhism and was the chairman of the Libertarian Party of Utah. He lives in Salt Lake City, Utah, with his wife, Sondra, and their children.

Jake has recently been writing for the Punk Rock Libertarians website. For example, you can read his article on Discordianism, which originally appeared in Strange Attractor.

Jake agreed to take a few questions about his Discordian Libertarians group (a good source of news and discussion on Facebook) and some of his oft-provocative ideas:

Robert Anton Wilson's skeptical attitude toward authority traces back to his childhood, when his severe illness, polio, was successfully treated by a method not approved of by the American Medical Association. Do you see any parallels with your own childhood experiences with serious illness?

When I was nine or ten I nearly died as a result of a gangrene infection from a botched appendectomy. When I got a little older I asked my parents about the incident and they told me they probably should have sued the doctor but they just let it go. When I got even a little older I found that the medical establishment actually had a name for the problem: iatrogenesis.

According to work published by Dr. Barbara Starfield (RIP) in the Journal of the American Medical Association, iatrogenesis,  or 'death by doctor', is the third leading cause of death of Americans, after cardiovascular disease and cancer. She estimated conservatively that 225,000 Americans die due to iatrogenic causes every year. The Institute of Medicine puts the number even slightly higher. If you add in the mortality stats from adverse drug reactions (ADRs), then Western medicine actually kills more Americans than anything else. This is the biggest risk Americans face but hardly any seems to be rallying behind the cause or raising awareness of the issue except for a small handful of us.


So yes, my experiences like this as a kid, coupled with research like this and a healthy interest in bioethics as well as the philosophy and rhetoric of science have all reinforced in me a healthy skepticism of both so-called "skeptics" and "authority" generally speaking. Stumbling upon the writings of RAW in my 20s (I turned 41 this year) really helped me maintain my confidence while vocally expressing my criticisms of scientism and the so-called "skeptics."I've drawn a few serendipitous parallels between my life and that of RAW's in my book but I hadn't really thought about this particular one until you just now asked. Thanks! 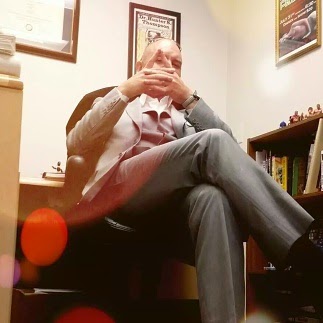 When did you form Discordian Libertarians, and why did you form it? Is it a Facebook group, or are there other aspects to it?

The Discordian Libertarians group on Farcebook (intentional spelling) is less than 6 months old as of this writing. I created it for the same reason I've started many of my projects: I was looking for a pre-existing group like it and when I found there wasn't one, I just made one. I have been pleasantly surprised at the response. Since its inception we seem to be growing at a rate of a little more than 100 new members a month. I think because it is such a niche, the quality of the posts and discussions have been quite good so far (knock wood). Given the obvious interest in this project, some of us in the group are already talking about having a gathering of our Libertarian Society of Discordians (LSD) in 2015, possibly in Colorado. I am tentatively calling it Fnord Fest, maybe it will be like a Burning Man for slackers that prefer air conditioning and hot dogs to harsh desert camping. I hope it would consist of lectures, performance art, a DL flea market and other assorted debauchery. I also hope our group can do some epic OMs and Project Jakes too.

I talk a bit about the reason for creating the LSD/DLs in Strange Attractor but the the nutshell version goes something like this; as a direct result of the bad taste left in my mouth after being Chairman of the Libertarian Party of Utah and hosting my own libertarian talk radio show in the most conservative state in America, I needed to do something very different. It had to be something with a sense of humor and something edgier and more subversive. Establishment politics was too serious and way too negative. The LP Utah and the radio station K-Talk were great experiences and full of great people but some of the negativity was too much for me to expose my family to (IRS harassment, stalkers, death threats, etc.) so once my tenure was up, I left both the radio show and LP behind. I had been a part of some Cacophony Society of San Francisco events in my 20s so I wanted to recreate something like that here in uber-conservative Utah. Ultimately I want to create a "Yes Men" comprised of individualist anarchists influenced by RAW. I have quite a long list of pranks but I am still trying to find like minded people to help me fund and execute them. Hopefully DL/LSD grows in that direction but then another part of me equally wants it to schism until there are all these DL cabals comprised of only one member; a cabal with one leader without any followers. I guess we'll see, maybe we can do both?

I tweaked RAW's prose thus because I was growing very weary of the fear-mongering and sense of hopelessness I had noticed consuming the "Liberty Movement". I felt it important to inspire optimistic individualist anarchists by shifting their attention to the blessed liberty they already had (and could grow) but were souring it with the pessimism and constant focus on the negative. I speak of this a bit in my "Strange Attractor" book and have reiterated it in a couple follow up blog posts (here and here). I truly hope that "liberty is what you can get away with" becomes a bit of a libertarian mantra reminding people of reasons for libertarian optimism, like encryption.

Encryption is key to individual liberty, no doubt. Remember Shannon's maxim (not me, Claude), "the enemy knows the system." Really, all the secret handshakes in secret societies function the same as an encryption key. I suppose it is safe to assume then that I also believe secret societies can be an example of liberty carving out a space for itself too.

Your book predicts that there will be a total financial collapse of the system that props up the U.S. government. How confident are you about that? Is that still  your prediction?

Yes, there is a coming collapse of the American political economy as we know it but that isn't to sound apocalyptic or to immanentize the eschaton in any way. I am an apocaloptimist actually. As Johan Galtung so succinctly said, "I love the US Republic, and I hate the US Empire." The debt levels of the US Federal government are unsustainable, this isn't really controversial. Both the Congressional Budget Office and General Accounting Office figures corroborate this. The date when the debt to GDP ratio proves that the US Federal government is insolvent arrives shortly after 2020.


My guess is that when this collapse comes it won't result a Mad Max scenario. Instead it will be more similar to the post-USSR economy until, of course, entrepreneurs zip in to fill the service gaps previously provided by the government sector. I am optimistic since the Millennials, those that will be taking the reigns of power after the collapse, seem like a demographic that favors decentralization. I could be wrong though, I mean just look how poorly the hippies did when they inherited the reigns of power. I discuss the mechanics of the collapse in my ENDonomics book, but my prose there is probably too tedious and boring for most reasonable people.

Do you regard taking an antiwar position on U.S. military adventures overseas an important element of the liberty movement? It's an impression I get from your book, but I thought I would make sure.

Yes, I think it is very difficult to be both pro-war and libertarian simultaneously. This is why the combination of sociological recuperation and the Beckian/Palinesque detournement so effectively neutered the liberty elements within the nascent 21st Century Tea Party movement. It was basically conservatarian jingoism that brought the Tea Partiers back under the influence of the Republicans, unfortunately. This theme was given a much longer treatment in my TEA-O-CONNED book.

No one that actually knows my positions would ever call me a conservative but that is the great thing about libertarianism, in my opinion. It serves, as Nozick called it, as a framework for utopia. Meaning, libertarianism is a big tent where both conservatives and revolutionaries can get together to battle their common foe, authoritarians (this was a point made originally by George Orwell).


I do think it is important to make it explicitly clear that libertarianism isn't pacifism though. A libertarian is just a pacifist that will punch you back.

Is there any way to get your Discordian Libertarian postings without going on Facebook, e.g. is there an RSS feed or do you also post on Twitter or a blog?

Not right now, if there is more demand I suppose I will have to spin it off onto its very own blog or RSS feed but right now we have yet to even break 1,000 members in our FB group. In a way, I sort of like staying small since you can avoid political recuperation easier but we'll see. Right now, if you care to join the Discordian Libertarian cabal then the farcebroke page is probably the best place. I do post my Discordian Libertarian aphorisms and essays (thots) on my personal blog at jakeshannon.tumblr.com. Most of my social media links are available at JakeShannon.com.

"Liberty is what you can get away with" seems to sum up this guys business ethics.

Did you read my rebuttal at the bottom of it?