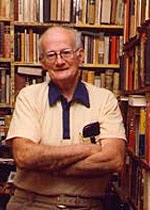 For a long time — ever since I was a high school student — I've been a huge fan of an Irish-American writer from a Catholic background who often is identified as a science fiction writer, although his work actually is kind of unusual and doesn't fit easily into any commercial category.

I'm not talking about Robert Anton Wilson (who I didn't discover until college). I'm talking about R.A. Lafferty. (I interviewed him a couple of times over the years and first met him when I was in high school.) He is pretty much out of print, but the Guardian ran a piece on his persistence as a cult author and suggested that maybe he is poised for a comeback. Thank you, Supergee, for spotting this and sharing it on your blog so I could see it.

Here is a bit from the Guardian piece that might intrigue RAW fans and get them interested in RAL. After quoting from Fourth Mansions, one of my favorite Lafferty books, the article writer (whose byline I could not locate) writes, "There's something of the Irish comic tradition in there, the absurdity and surreality of Flann O'Brien, author of The Third Policeman."

He is from my hometown, Tulsa, Oklahoma, and Okie SF fans remain among his great champions.

Nine Hundred Grandmothers is his best short story collection, maybe even his best book. Years ago, when I talked to the famous SF editor Terry Carr at a convention, Carr told me he put together the book by collecting his favorite Lafferty stories. Does Anyone Else Have Something Further to Add? also is very good. Strange Doings also is well regarded, although I like it less well than the other two. Other short story collections probably aren't as good.

The best novels mostly come from early in his career. My favorites are Space Chantey (based on the Odyssey), Past Master, Fourth Mansions, and The Devil is Dead (all published as science fiction fiction) and his historical novel about a Choctaw Indian in Oklahoma, Okla Hannali. I also liked Archipelago (good luck finding that one) and The Three Armageddons of Enniscorthy Sweeney, published as the back half of Apocalypses, a 1977 paperback original that consisted of two short novels.

Update: Another comparison with RAW: There are blogs and websites devoted to RAL. See here, here, here and here.

I got turned on to Lafferty by a comment I read by Neil Gaiman back in the early 90's (before Amazon). None of my libraries or bookstores had any of his books, so I bought a few of them when I attended to World Science Fiction Convention in San Francisco in 1993.

With a little digging, his books pop up online here and there:

Hey, thanks for linking to my blog (Ants of God are Queer Fish) and thanks even more for spreading Lafferty awareness. There's one more blog out there that I know of: http://failingevenbetter.blogspot.co.uk/

@Bill Trommer, There are a few stories available on the Internet here and there, but no books. Gutenberg has a couple of the stories.

You can download his Complete Short Stories at the link below: