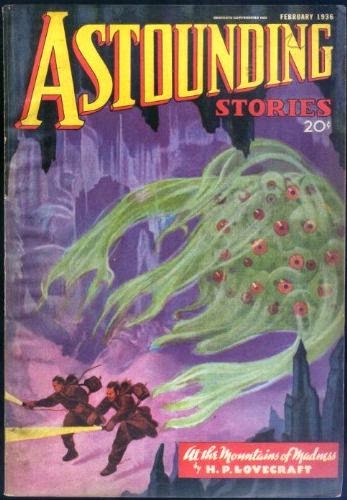 Cover art for the February 1936 issue of Astounding Stories, which ran H.P. Lovecraft's At the Mountains of Madness as a three-part serial. The artist is Howard V. Brown.

(This week: Page 348 "Richard Jung, wearing Carl Jung's old sweater and smoking his pipe," to page 359, "and the sight of that miniature representation of the giant Tlaloc in Mexico City.")

Here is a section which ties together some of the points made in previous section; see for example, the last couple of posts. We get the Lovecraft Cthulhu mythos, the Pentagon, Dutch Schultz's last words (with a key to some of his coded references to the Illuminati) and the National Security Act of 1947.  Once again, fictional and real elements are tied together with Wilson and Shea's Discordianism (or, if you prefer, illuminated libertarianism). And this is the section in which Robert Putney Drake, realizing that he embraced power rather than illumination — he took the bad from what the Illuminati had to offer, rather than the good — helps George flee but accepts his death:

"You go," Drake said. "Down the stairs and out the back, to the garage. Here's the key to my Silver Wraith Rolls Royce. It won't be any use to me anymore."

"Why aren't you coming?" George protested.

"if a cheap hoodlum like Dutch Schultz had a poet buried in him, what might be released if any many looked the old whore Death in the eye? Say that I betrayed my country and my planet, but worse, add that I betrayed Robert Putney Drake, the giant of psychology I murdered when I used the secret for power and not for healing. (Page 354)

"For Petrucho's feast," he explained, Page 348. I'm likely wrong, but I wondered if the authors meant to reference Trimalchio's feast in Satyricon.

"The 2009 U.S. military budget accounts for approximately 40% of global arms spending. The 2012 budget is 6–7 times larger than the $106 billion military budget of China The United States and its close allies are responsible for two-thirds to three-quarters of the world's military spending (of which, in turn, the U.S. is responsible for the majority). The US also maintains the largest number of military bases on foreign soil across the world."

"Our job," Huxley wrote before death, "is waking up." (Page 350) It's said that the Buddha, shortly after his enlightenment, was asked if he was a god, a magician, a man, questions Buddha all answered "No" to. "What are you?" he was asked. "I am awake," the Buddha replied. Drake has awakened, on this page, in both senses.

"One hundred and fifty-seven, he thought, remembering the last entry in his little notebook. One hundred and fifty-seven rich women, one wife, and seventeen boys. And never once did I really make contact, never once did I smash the walls."  (Page 352.) I remember reading in college that many men make a list of their sexual partners (Drake would think of them as "conquests") if only in their heads. Is Drake realizing he could have used sex for enlightenment rather than just an expression of power?

"The whiteness of the whale," page 353, Chapter 42 of Melville's Moby Dick. "Is it that by its indefiniteness it shadows forth the heartless voids and immensities of the universe, and thus stabs us from behind with the thought of annihilation, when beholding the white depths of the milky way?"

"The very sounds recorded by Poe and Lovecraft: Tekeli-li, tekeli-li. It must be close." Poe: The Narrative of Arthur Gordon Pym; Lovecraft, At the Mountains of Madness.  In the Lovecraft stories, the sound made by the ancient monsters of the Cthulhu Mythos that an expedition of Arkham Universities in Antarctica stumbles upon. As Wilson and Shea point on on Page 331, this is also the story in which Lovecraft hammers on the Law of Fives — the Old Ones have five-pointed starfish heads, their limbs and their architecture is organized into groups of five, and so on.

"the sight of that miniature representation of the giant Tlaloc in Mexico City," page 359. Tlaloc also has appeared on page 9. 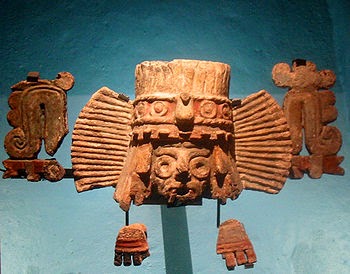 (Next week: "But three hours after Drake's death," page 359, to "It would be interesting to get into mathematics, really deep," page 368.)


P.348 "And next the solar system" then they go into different worlds - Alice in Wonderland, Playboy, cartoons, monster movies etc. seems a good way to describe voyaging oob; also seems hellish at times, but always wins out - the Prince of Wands symbolizes liberation. Then they go back into darker areas before Frankenstein wires up Lovelace(p.349) and they get back on course - "where the door opened to the airplane cabin."
To me, everything from "... solar sytem" to "... airplane cabin" symbolizes traveling from Tiphareth through the Abyss to the Supernal Triad. The element air corresponds with the path of Aleph (the tarot Fool) that connects Sephira 2 to 1, hence air plane.

p.348 "Lepke with accusing eyes" seems a key line with the pun on "Lepke"


I will have to watch Bride of Frankenstein again.

"What did it matter when "the blind idiot God Chaos blew earth's dust away." I mixed a record for a band called Blind Idiot God named from a Lovecraft story. Also relate this line to the Lepke one.

Joining in late, as I had just finished my. 4th or 5th read of the opus at the time Tom announced the group read. My original thinking was to start at week 1 and read 2 or three weeks per week, catching up with you all somewhere around week 45 or 50.

Then I figured I would dive in here AND start at week one, eventually recombining my particle-wave split somewhere around week 45/50.

Now I'm pretty sure I'm going to start here and read the earlier text and commentary In Reverse Order. That should do a decent job of discomBOBulating my noggin!

Interesting idea for how to reread the book, Chas.

I think the reference to Petruchio's feast on page 348 refers to Petruchio in Shakespeare's The Taming of the Shrew, a great play about brainwashing. Petruchio refuses to attend his wedding feast in the play so he can brainwash his new wife.

'"Man is a giant, Drake says, 'forced to live in a pigmy's hut.'" (pg. 351) Bob says something similar in Prometheus Rising. I find this passage and the following pages very sobering. Day to day challenges eat up so much of our time and energy. "What then shall we do?", as Tolstoy asked.

I find interesting the number of references to Moby Dick in this section. It makes me think of the Starbucks conspiracy - all these locations named after the first mate from Moby Dick.

@Chas, The original three separate paperbacks of Schroedinger's Cat have a preface saying that the three can be read in any order.

chas, you might also want to check out Eric Wagner's "Insiders Guide to RAW" for additional commentary on Illuminatus! I got a lot from it, also looking forward to his next book Noon Blue Apples ( I believe) about James Joyce.

Eric, great references with Shakespear's "Taming of the Shrew," and Melville's Moby Dick. The latter reminds me of another line I've seen in RAW books, "Schrodinger's Cat", I believe: "King Kong died for your sins."

Fwiw, I asked the Thoth tarot Tolstoy's question and got the Ace of Disks which seems a good answer, to me.

Nyarlathotep on p. 350: Drake isn't quoting Lovecraft's story of that name but HPL's like-name poem which is #21 in the Fungi from Yuggoth sonnet cycle. "The blind idiot god Chaos blew Earth's dust away" is the last line.

Thanks for the kind words, Dr. Oz.

Actually, I published a poetry zine in the 80's an 90's called noon blue apples. I call my new book Straight Outta Dublin.

Interesting tarot reading. I think Tim Leary got that card when he asked about his destiny according to Cosmic Trigger.

Thanks for the kind welcoming's and recommendations, folks. I am indeed finding this backwards and forwards reading to be quite illuminating, heh heh. Indeed I am finding Illuminatus! to be a 20th century western I Cing! When in doubt crack it open and read a few pages--something in there is bound to rattle your synapses enough to send you off in a profitable direction.

Eric--that midget quite goes. "We're giants rIsed by midgets walking in perpetual mental stoop." I recall that one at least once a week (for good reason!).