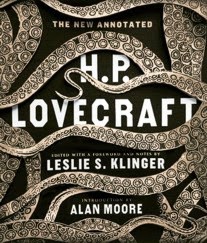 Anyone who is interested in H.P. Lovecraft will want to read British philosopher John Gray's new article, "H.P. Lovecraft Invented a Horrific World to Escape a Nihilistic Universe." It explores the philosophy behind Lovecraft's writing. It's full of insights and zingers such as this one:

Far from disappearing from view as he expected, Lovecraft has been repeatedly resurrected by successive generations. No one would now write of him as the critic Edmund Wilson did, in the New Yorker in 1945: “The only real horror in most of these fictions is the horror of bad taste and bad art.” The true horror was in fact that of judging Lovecraft by the standards of a defunct literary culture.

The book is a must have for Lovecraftians, but it's not a full collection of all Lovecraft's stories. Even some of the best known are missing. There are plenty of complete Lovecraft editions around, some of them free on Kindle. But a complete annotated edition is yet to come.

And right on cue here's the latest Complete Works in hardcover, not annotated but at a reasonable price: http://tinyurl.com/o7gc2sy