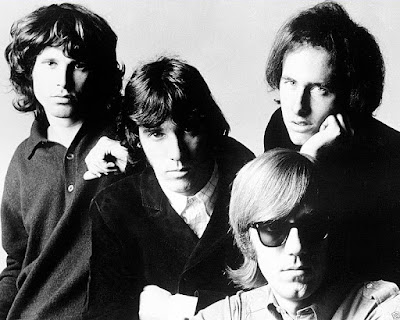 The rock band The Doors. Maybe the best thing about the band was that it took its name ultimately from the wonderful William Blake quoted cited at the beginning of RAW's essay. Public domain photo, source.

I tend to classify Robert Anton Wilson's work in terms of three main periods: The early years (when he wrote for Paul Krassner's The Realist and other publications, middle period "classic" RAW (including Illuminatus! and Cosmic Trigger, and the later period of books such as TSOG.

But "Sex Education for the Modern Liberal Adult," tends to suggest that not too much should be made of such classifications, as it is sharply written and just as good as anything written during the "classic period."

And it, and the other pieces selected by Chad, make me wonder how much other really good stuff is out there, as piece by piece, it seems to me that Natural Law Or Don’t Put A Rubber On Your Willy And Other Writings From A Natural Outlaw is as consistent in quality as Email to the Universe, which I regard as an exemplary collection.

"But to see your own blood draining out ... " I never minded giving blood (which I stopped doing after I was made sick from hepatitis by eating a doughnut, from a shop which had employed someone who was sick and thus managed to spread it to quite a few people), but when I had a nosebleed recently, it was startling to me!

I love the sentences about how millions of "cycles, epicycles, rhythms, and processes" make up our day to day existence, including such things as spring, summer, fall and winter. I confess that moving from Oklahoma to Ohio has reinforced by loathing for cold weather. But there's also something to be said for the sharply drawn four seasons in the northern part of the U.S.

The church's loathing of sex inspired the same sort of strong dislike in me that it inspired in RAW, although in fairness the modern church seems much more sensible than the early church, when loathing of the body was much worse. (There is apparently controversy over whether the early Christian scholar Origen castrated himself.  St. Paul's statement that it is "better to marry than to burn" would seem to suggest that lust is unnatural or sinful.)

"A Zen master once summed up Buddhism in the one word, 'Attention'." This is another example of how RAW understood Buddhism rather well; this is a good one-sentence summation of mindfulness, which is essentially the practice of Theravada Buddhism.

The remarks about the "oceanic experience" seem to suggest a kind of mysticism that does not conflict with science. Are we "all stumbling into this experience constantly," as RAW asserts, or do only some of us do? For an essay that's only a few pages, this seems like a remarkable manifesto.

Footnote: I should not that I re-read this chapter on my smartphone, using the Nook ebook I purchased from Barnes and Noble. As I wrote a few days ago, the inexpensive ebook does seem to work now.

This was written two issues prior to RAW’s interview of Alan Watts in The Realist, so he was almost certainly on his mystical A-game. It has a very Wattsian feel.

I imagine this essay would have more pop appeal than any other in the book. Clever, spicy topic, funny, appealing even to those interested in metaphysics.

I must admit that I tend to prefer Bob's writing post-7/23/1973 more than his earlier writing. I find it interesting that he talks about his intense anger against people who disagree with him about bodily functions, and then he comments that intense anger seems a symptom of muscular armoring.

I find it interesting that this is very early Bob, written in the 1950s when he was still in his twenties. And many of his influences are already here: Reich, Pound, Freud, Zen, Blake, Swift… Later on in the late Sixties/early Seventies, he was perhaps, just like Leary, a bit older than many of the hippy kids, but an essay like this one goes on to show that he was in fact ahead of the curb in his interests.

At this point, it had only been a few years since RAW had successfully undergone Reichian therapy for himself, so its positive results were still fresh in his memory. And that should probably include muscle memory.

“The purpose of yoga, of what the East calls ‘ways of liberation’, [is] to become more acutely aware on all levels of the senses, nervous system, and ‘mind’.” (p.93) This connects to last week’s discussion about getting “out of our heads” to “come to our senses, literally”.

Someone such as Israel Regardie sort of syncretized Reichian techniques and body mindfulness in his work as a therapist. Although I do not know for sure if the cycle of the sexual orgasm really is “the most important […] in the life of a healthy adult”, becoming aware of similar cycles of muscular contraction and relaxation appears the basis of both body mindfulness and Reichian techniques. In other words, “attention”.

Although he isn’t named in this essay, Bucky Fuller also said that Universe is all about tension, and that is of course what muscular armoring is. I find it noteworthy that, as words, tension and attention would sound so closely related. The power of wording is discussed in the essay when mentioning the discomfort some people experience around the sex-related vocabulary. As such, we indeed find here both the General Semantics and Zen Buddhism ideas that Chad in his Introduction told us seemed to be “the most prominent thread running” in the book.

Pornography seems a different beast since since RAW railed at those who call it vulgar. I daresay he may have found some modern pornography vulgar.

This, naturally, reads like early RAW. He appears to have not yet discovered Crowley, tolerance for disagreeable views, and probably hasn't begun the Sufi heart exercises described in Cosmic Trigger. His "militant anger" will gradually transform more in the direction of compassion for all things, another central tenet of Buddhism.

This essay fits well the theme of the book. The call for "attention" seems worth the price of admission.