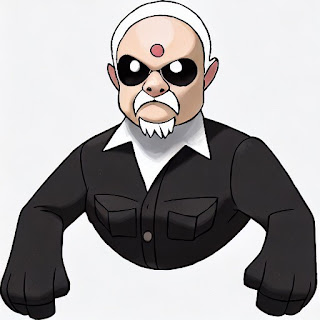 Robert Anton Wilson as a Pokemon, posted on Mastodon by @putmyspellonyou@nerdculture.de

Elon Musk's tenure as Twitter boss has been notably rocky, disappointing his supporters and making his foes gleeful. A thread I spotted on Twitter from Anosognosiogenesis@pookleblinkyappears to apply the Snafu principle to Musk:

"Robert Anton Wilson's SNAFU principle: communication is only possible between equals. The powerful are surrounded by yes-men who filter all information to them to minimize their discomfort.

"This is one reason billionaires don't understand *anything* about anything."

Here is all of the thread.

Speaking of Musk, sort of, I have been experimenting with using Mastodon, which has become the alternative social network of the moment. If you care to follow me, I'm @jacksontom@liberdon.com

Mastodon intrigues me because it is decentralized, operated from a bunch of different servers, so in theory one person or one corporation can't take it over and impose his/her/their will on everyone. (You don't log on to "Mastodon," you log in to your particular server hosting your account.) But at least so far, I don't see it as a viable alternative to Twitter.

I tend to use Twitter as a kind of headline service and to follow people who I think are particularly interesting.

As far as I can tell, most of the Mastodon users are left wingers who are mad at Elon Musk. So if you want to read endless denunciations of Musk or Donald Trump or read a lot about trans issues, it's a good site.

But Mastodon has little on many topics I'm interested in. For now, I'm going to have to continue to use Twitter to follow what's going on in the world of Robert Anton Wilson fandom. There are a few RAW postings, but not a lot. I also can't use Mastodon to follow news about my favorite sports team, the Cleveland Guardians. I searched and searched, and all I could find were a couple of general baseball feeds.

And many of my favorite Twitter folks haven't migrated to Mastodon yet. Prop Anon is on Mastodon, and so is John Higgs, but many other folks aren't there, or have set up Mastodon accounts without actually being active.

Perhaps as Mastodon grows, it will become more comprehensive in its topics and more useful. And I did manage to find a libertarian server (or "instance"), liberdon.com, to host my account.

Here are a couple of Mastodon guides: From Nikodemus, and one from joyeusenoelle.

"So if you want to read endless denunciations of Musk or Donald Trump or read a lot about trans issues, it's a good site." intentionally or unintentionally, that's hilarious :D

I created a mastodon account on a discordian server:
@BobbyCampbell@discordian.social

Haven't done anything with it yet, but who knows!

Turns out this has been a particularly good time to bury my head in the drawing board and let all the various discourses pass by outside my window :)))

I am a big fan of Tesla Elon, and Space X Elon, and even Paypal Elon, but Twitter Elon jumped the shark and I'd have to say there is a certain amount of cognitive distortion going on there - dude wrecks the place in two months (and no, I don't mean all the hysteria about the layoffs, but all the rest...) and then seems to think he's the only one who can fix the mess he made. I don't get the sense that there's a yes-man thing going on - I do get the sense that Elon has always blazed his own trail... and that his past successes have made him overconfident, and that he really doesn't understand the social media "image" game like he does other tech/startup games.

I have not experimented with other socials but my impression is that Mastadon is going no-where, but nostr shows some promise.

We're moving into the next stage of internet (decentralized "web3" read-write-own) and it will be interesting to see what becomes the latest aol, myspace, yahoo, and what emerges as the next big thing. It seems clear to me that most social media, and google, and even aspects of Amazon (review harvesting, third party selling turning into a ebay like garage sale) have past their prime and are in decline.

@Rob, Yes, my comment is double-edged, but I do think the quality of discourse on Mastodon is pretty good. I haven't seen any of the Twitter nastiness so far that both of us have run into. And I felt better when I found a libertarian server.

@Bobby, I did search for a Discordian server without success. Very useful information that you found one. There are often better things to do than to spend hours on social media ...

@Mike, I'm a fan of the other Elons, too, and it's disheartening to watch his crazy, on-the-fly moderating decisions. What happened to the "free speech absolutist"?

Just to be clear (after my remark to Rob) I like trans people just fine and I'm not a Trump fan. I just wish there was a wider discourse on Mastodon, but perhaps that will come with time.

British magician David Lee has made the same Elon/SNAFU connection in his most recent newsletter:
https://chaotopia-dave.blogspot.com/2022/12/popular-bird-throttled-by-narcissist.html