I enjoyed the Claude Shannon biography 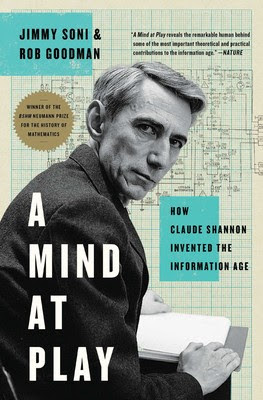 I don't know how history is taught here in Japan, but in the United States in my college days, most of the time was spent on the study of political leaders and wars -- Caesars, Napoleons and Hitlers. I think this is totally wrong. The important people and events of history are the thinkers and innovators, the Darwins, Newtons and Beethovens whose work continues to grow in influence in a positive fashion.

-- Claude Shannon, quoted in A Mind At Play

Spurred by listening to the recent Hilaritas Press podcast on Claude Shannon, the American mathematician mentioned in RAW's works, I spent the week reading A Mind At Play, the biography written by the two co-authors Mike interviewed in the podcast, Jimmy Soni and Rob Goodman.

Shannon essentially invented information theory and led the way for the digital age with his seminal 1948 paper, "A Mathematical Theory of Communication." Among other points, Shannon showed how all messages could be transmitted using the binary digits or "bits" used by computers, showed how noise could be eliminated from messages (it was previously assumed, the authors say, that noise in messages was just something you had to put up with), showed how files of information can be compressed and provided other insights. The authors also cover Shannon's other work, including many devices that showed how Shannon's mind worked and how he liked to amuse himself. (He invented a wearable computer to use in casinos while trying to win at roulette, an early chess playing computer and a flame throwing trumpet. One of Shannon's devices that amused me had a switch that was flipped to be turned on. When you flipped the switch, a hand would emerge and turn the switch off!)

I did my best to follow the authors' technical explanations. Next I plan to read another book dealing with information, James Gleick's The Information: A History, a Theory, a Flood, which apparently also has quite a bit about Shannon.

I can't help but notice how different Shannon was from another subject of a Hilaritas podcast, Buckminster Fuller. As Alec Nevala-Lee's biography shows,  Fuller did have many interesting ideas, but he fibbed constantly about his biography and achievements, took credit for other people's ideas, exaggerated his successes and constantly sought fame and acclamation. A Hilaritas podcast with Kurt Przybilla covers some of Fuller's ideas and also transmits some of Fuller's self-serving BS, although to Przybilla's credit, he corrected podcast host Mike Gathers when Mike suggested that Fuller might be the kind of person who didn't worry about credit. (The podcast came out before the Nevala-Lee book, so neither the host nor the interviewee had access to Nevala-Lee's revelations).

Shannon simply pursued his own interests. He avoided publicity when he could and tried to avoid being turned into a guru.

After Shannon became famous, he wrote a piece called "The Bandwagon" in which he tried to discourage others from turning Shannon's information theories into all-purpose explanations for unrelated fields. And when Fortune magazine ran a piece on Shannon, with two opening paragraphs hailing Shannon's genius, Shannon protested that "communication theory is not in the same league with relatively and quantum mechanics."

It's also telling, I think, that Fuller apparently made up a story about Albert Einstein appreciating Fuller's genius while Shannon downplayed his interactions with Einstein, merely saying they sometimes waved to each other. Shannon worked for awhile at the Institute for Advanced Study at Princeton, where Einstein was the most famous scholar. According to one story, one time when Shannon was lecturing, Einstein wandered into the classroom, listened for awhile, whispered into the ear of a man at the back, and then left. When he finished his class, Shannon rushed to the back of the room to find out what the great man had said. Einstein had asked where to find the bathroom!