'The Periodic Table of Energy,' a lost RAW-Leary book 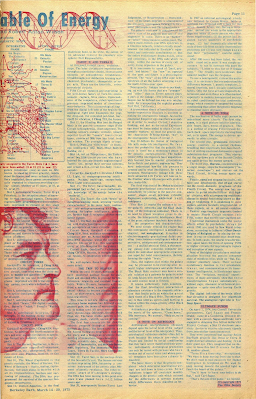 The Periodic Table of Energy is an unpublished book that apparently was a collaboration between Timothy Leary and Robert Anton Wilson.

Prop Anon, who has been posting many RAW-related documents since completing his biography of Robert Anton Wilson, which is being brought out by Strange Attractor, has published an article on his Chapel Perilous website, "The Periodic Table of Energy--RAW's 1st article about 8 Circuits!"

Prop describes the piece as RAW's first piece on the Eight Circuit model, and the intro for the piece in the Berkeley Barb makes it clear that it's a collaboration between the two friends, Wilson and Leary.

The editor's note/intro to the 1975 piece from the Berkeley Barb, written by someone named Steve Long, says:

Wilson is currently writing The Starseed Signals, a book based on Leary’s scientific development from 1957 to the present: “I’m hoping to demonstrate that, as usual, the man most persecuted by society is its greatest genius,” he said.

Bob Wilson summarized The Periodic Table of Energy as follows: “The basic idea is that the human nervous system can evolve through 24 stages, turning on to new signals at each stage, tuning in to new gestalts, and therefore literally developing new circuits or new ‘brains.’ And the nervous system has been preprogrammed to through this evolution.”

Elsewhere, The Periodic Table of Energy excerpted in the Barb has been treated as an unpublished Leary book. Here is my 2012 post about the manuscript being auctioned off.  Here is the Boing Boing piece, by Mark Fraunfelder, about the auction. You can read the press release about the auction,

I don't know who bought it, what happened to the manuscript, or if anyone is going to bring it out; I will make inquiries. Maybe Prop knows something?

Sounds like the book they released together called The Game of Life.

a listing in Exo Psychology shows "Periodic Table of Evolution", separate book from "The Game of Life"